Dinner Time at the ‘Vulture Restaurant’

Feeding vultures with carcasses of dead cows is an innovative way out of two perceived problems in Nepal: how to get rid of unproductive, but still sacred cows, and how to help the endangered vultures to prevent them from going extinct.

On a small piece of grassland near a small village in South Nepal, a local man offers the body of a dead cow to the vultures sitting in the tall trees surrounding the field. This is known as the ‘vulture restaurant’.

The ‘vulture restaurant’ came to existence in Nepal because it is forbidden by law to kill a cow because of religious and legal reasons. According to the new national constitution (2015) the cow is officially declared ‘the national animal’. Whether sacred or not, a cow will eventually get old, lose its productive and reproductive functions, and its strength to pull a plough or a cart will also gradually diminish. But the animal may still live for a number of years before it finally dies a natural death.

Old but still living cows are therefore considered a burden to farmers because they have to be fed and taken care of on a daily basis for no benefit. When a cow eventually dies it has been a common practice to bury the carcass of the cow which is an additional task to fulfil. 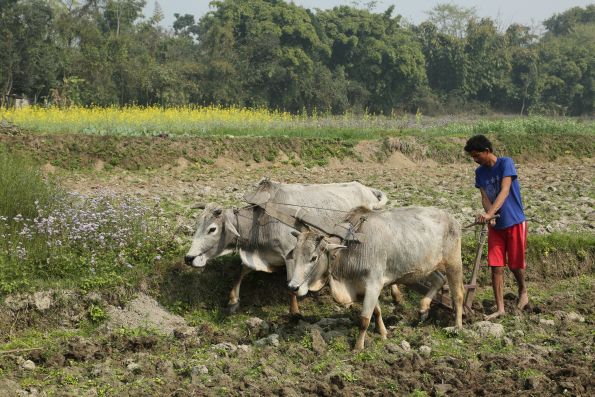 Cows ploughing the field after the harvest of mustard seeds. Photo by Gerard Persoon

On the other end of the story, vultures around the world are facing a serious decline as a result of decreasing wilderness areas and the use of harmful chemical diclofenac in livestock raising. The possible extinction of specific vulture species has alarmed nature conservationists but solutions are not easy.

In Pithauli, a small village in the western buffer zone of the Chitwan National Park, a local leader named Dhan Bahadur Chaudhary, came up with a solution for both problems mentioned above. By offering local farmers to take over the care for the unproductive cows, they were released from a considerable burden in their daily activities.

Financial support, obtained from a number of conservation agencies including the National Trust for Nature Conservation in Nepal (NTNC), could be used for the care taking. Once a cow had died its natural death, the carcass was then taken to an open field on which the vultures could feed on its dead body.

Within a few years the number of vultures in Pithauli has rapidly increased. Up to 217 vultures have been counted in this area. During a count early this year, more than 37 nests were recorded in the neighbourhood of the ‘vulture restaurant’. Various species of vultures are attracted to the restaurant. They include some critically endangered species such as the Euroasian Griffon, the Red-headed Vulture, White-rumped Vulture and the Long-billed Vulture. In total nine species of vultures have been observed near the ‘vulture restaurant’.

There is a local committee which is responsible for the management of ‘vulture restaurant’. The committee is responsible for the finances, the buying of the cows, the care taking and the monitoring of the vulture populations, in order to assess the impact of the restaurant on the birds. The cows are bought for a very small price (Rs 250, Euro 2) from the farmers and a care taker feeds the animals daily.

By taking care of the animals for some time their bodies will be free from the chemical diclofenac. And once the animal eventually dies, the skin is taken off and sold to a local craftsman for the production of leather products. The remaining bones are sold for a small price for poultry feed production. 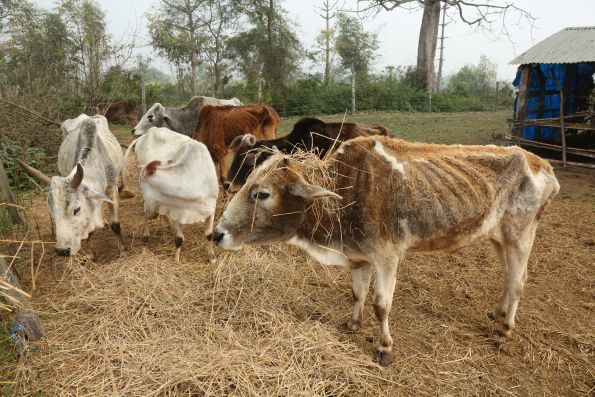 Unproductive, old but still sacred cows are still taken care until they die a natural death. Photo by Gerard Persoon

One of the Cultural Anthropology and Development Sociology Institute’s PhD researchers, Babu Ram Lamichhane, is studying the ‘vulture restaurant’ as part of a study on human-wildlife conflicts in and around the Chitwan National Park. Chitwan National Park is Nepal’s first National Park (1973) and a UNESCO World Heritage Site since 1984. The area is predominantly inhabited by Tharu people.

The focus of the research is on conflicts caused by the large mammals in and around the park such as tigers, elephants, rhino’s and leopards. Part of the research is also focused on how such conflicts can be mitigated and how local communities can play a positive role in the conservation of the park’s wildlife. Just like in many other cases of protected areas, there are also tensions between the national park management and the local communities surrounding the park. The communities are usually denied access to the park’s resources while they have to face serious damage as a result of crop raiding by herbivores, livestock killing by carnivores and even human suffering from attacks of tiger, rhino, elephant, sloth bear etc. 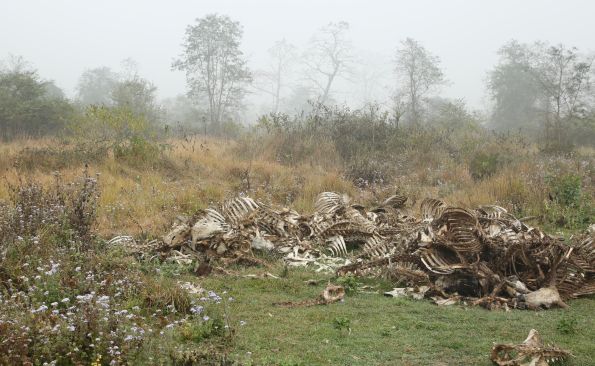 The leftovers of the carcasses of the cows after all eatable meat has been removed by the vultures. Photo by Gerard Persoon

The success of Nepal’s nature conservation activities in terms of increasing numbers of tigers, rhino’s and other animals, has also an impact on the intensity of human-wildlife conflicts. Various strategies to reduce these conflicts, like wire-mesh fences, electric fences, removal of ‘problem tigers’ and translocation of rhino’s to other national parks are being implemented. In addition to these large scale operations there are also smaller projects, such as the ‘vulture restaurant’.

Linking religion with nature conservation has been a line of thought for many years in conservation circles. In some cases there has indeed been an instrumental alliance between local communities and nature conservationists on the basis of their religion and belief systems and their traditional cultural practices.

In many cases however referring to the religious and culture heritage of local communities was not enough to establish a new conservation ethic. One had to move ‘beyond belief’ to achieve positive results. The ‘vulture restaurant’ seems an interesting case in which local farmers benefit from the initiative which is fully in line with their religious beliefs and practices.

It is very interesting about human-wildlife conflicts ‘vulture restaurant’ as part of a study on human-wildlife conflicts in and around the Chitwan National Park. One thing I would like to know about the Tharu people, inhabitants around Chitwan park concerning of the conservation. Is there any customary law that the people practice that can provide the conservation of the park?

I'm from Myanmar, lived in a town of India boarder when I was young and
I studied that there is a custom not to cut trees without permission of the guardian of the tree. Most people follow the custom, and this means, the same thing of reducing cutting trees as the obedience of what the government's law.

This is a highly interesting approach! It indeed contributes to the solution of two problems at the same time. I wish you very much succes with the further research.