'The Right to Vote' and Catalan Independence

Politicians in Barcelona are preparing for a new political battle as the Catalan nationalists' referendum is bound to take place on 1 October. Will it lead to new court cases because the referendum is unconstitutional?

A battle of words

A group of 30 honours students (3rd year) of Leiden University’s Faculty of Social and Behavioural Sciences paid a 4-day visit to Barcelona. The aim of the visit was to find an answer to the question about the role of a common identity in the struggle for autonomy in Catalonia. Over the preceding months, a number of preparatory meetings were held in Leiden, with lectures by experts on this issue.

The packed programme in Barcelona included lectures by representatives of various political parties and civil movements, the Dutch consul, a guided city tour about the civil war, a visit to a school, and discussions with journalists and students. In addition, students were also asked to look for an expression of Catalan nationalism (or its denial) in the urban landscape of Barcelona and to interview a number of people about this object.

Meeting with the former president of Catalonia

Right from the first lectures, it became clear that the struggle for Catalan independence is a heated debate. Politicians do not shy away from strong wording, like accusing nationalists of one-sided indoctrination, discrimination, and disrespect for the Spanish constitution. The nationalists, in turn, accuse the other parties of not respecting the democratic 'right to vote' and refer to the long history of occupation of Catalonia by the Spanish, and the '300 hundred years of plunder' (referring to the war of Spanish succession in 1714). Even words like 'fascism' and reference to the times of dictator Franco are used to express their discontent.

The organising committee had been successful in organising a meeting with the former president of Catalonia, Artur Mas, who was forced to step down from all political functions after the decision of the Constitutional Court that he was responsible for organising a referendum on Catalan independence in 2014. At the moment he is seeking support from political leaders around Europe. 'If the Scots can have a referendum why can’t we?' Interestingly one hour after the meeting a message was posted on his Facebook page about our visit to the office of the Partit Demòcrata Català. 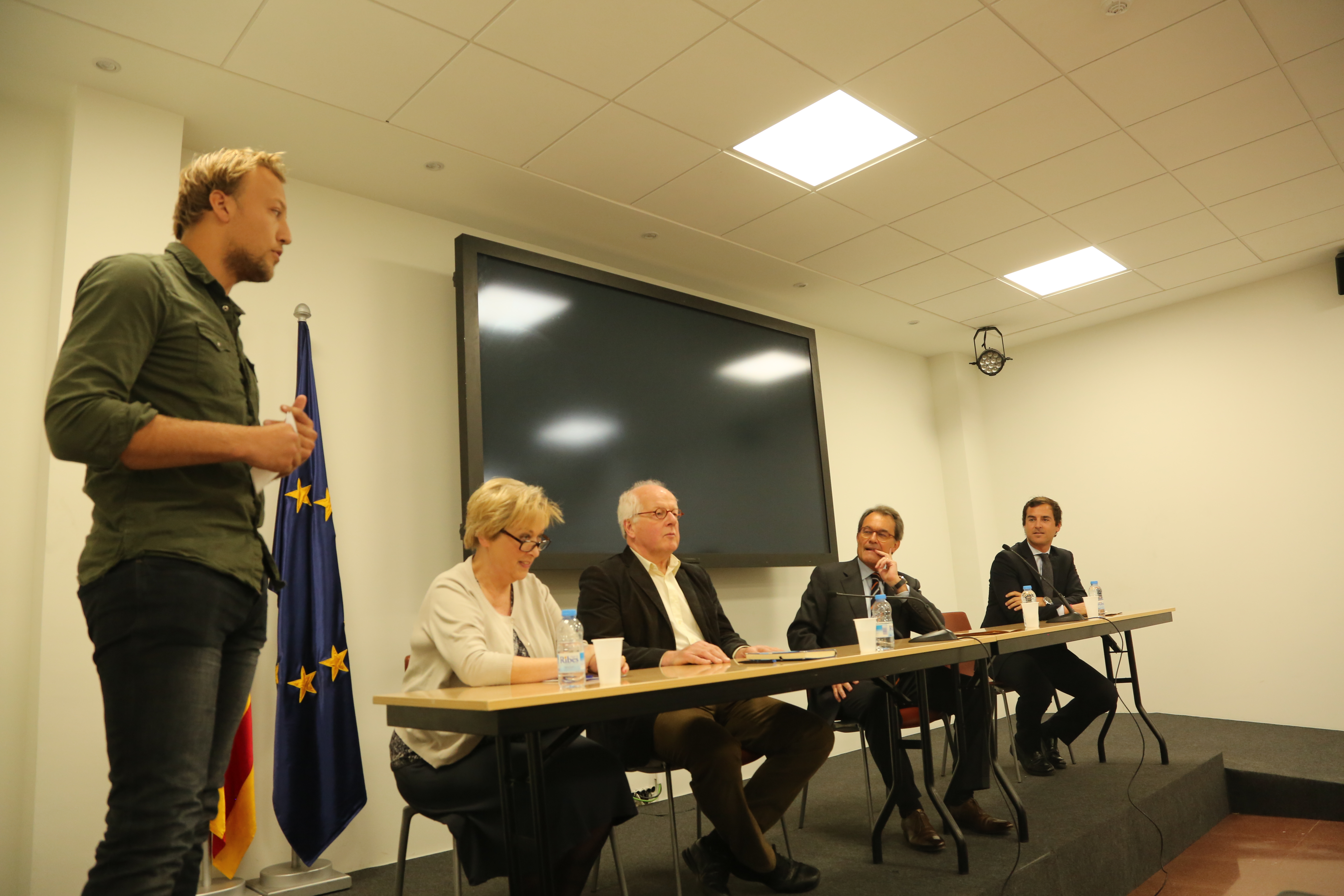 One striking aspect of all presentations was how numbers are used to either defend or belittle the claim to Catalan nationalism. The nationalists claim they pay a large amount of tax to Madrid, while they receive relatively little in return. They also state that the infrastructure of this part of the country is not in balance with its economic importance. There is a lack of intercontinental flights and good train and road connections to other cities in eastern Spain. Other speakers quote different figures and point out that Barcelona is not at the top of the country's tax-paying regions; they refer to the excellent quality of Barcelona´s airport, harbour, and other infrastructural facilities.

In contrast with the numerous controversial issues between various speakers, there was a clear agreement about the relevance of the Catalan language in defining the people's identity. Teaching the Catalan language from early childhood has been compulsory for quite a number of years. Although about half the population of Catalonia is of non-Catalan descent, there are more teaching hours in Catalan than Spanish in all public schools. Some speakers pointed out that there is quite a strong movement in favour of using Catalan rather than Spanish in restaurants and museums, and for cinemas to use Catalan subtitles for foreign films.

The historical context of Catalan nationalism goes back to the War of Succession of 1714 when Barcelona surrendered to the Bourbon forces after a 14-month siege. This event marked what is called 'the end of the Catalan nation'. Since that time Barcelona and the Catalans claim to have suffered from colonialism and dictatorship from the political centre. A new cultural centre, called El Born Centre Cultural Memòria, is devoted to the War of Succession and its aftermath. It is located in the former market hall of Barcelona.

Catalan identity in the public domain

On the last day, students and supervisors strolled through the streets and squares in Barcelona looking for an expression of Catalan nationalism or of antipathy towards it. The idea was that the students would interview people about that particular object and find out how Catalan identity and nationalism are expressed in the public domain and how the general public perceives this political struggle. The people interviewed could be local people but also domestic or foreign tourists. This element proved to be an interesting exercise in the programme. It allowed the students to see how ´the man in the street´ thinks about these issues.

Some students focused on a statue of a Catalan hero, others on a memorial site, or graffiti 'wars'. Others again opted for a poster in a metro station or objects in souvenir shops. Bookshops and music shops also held numerous items that referred to Catalan identity and nationalism through stories, songs, and images. A few students were lucky enough to walk into a park where groups of children were practising Catalan folk dances in preparation for the festivities of Sant Jordi, the Catalan patron saint (23 April). On this day, lovers traditionally give each other roses and books. 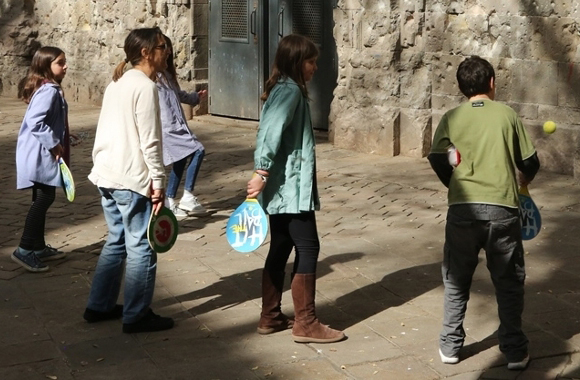 School children play a ball game against the wall of the church named after Sant Felip Neri. Clearly visible on the wall are the scars of the damage caused by bombs and bullets from the Civil War (1936-1939).

Another interesting item in the public space was the use of flags. Official buildings usually displayed three flags: the Spanish flag, the Catalan flag (four red and five yellow stripes), and the European flag. However many balconies sported a different flag: the Catalan flag, but with a star on a blue triangle. This flag is inspired by the Cuban one, showing the Catalans´ admiration for the Cubans who, after a long war with Spain, achieved independence in 1908. Since the rally for Catalan independence of 11 September 2012, whose who support the referendum for self-determination hang this flag from their balcony.

At the current time, it is uncertain whether there will be another referendum on Catalan independence this autumn, whether the people will insist on ´the right to vote´. It is highly unlikely that there will be any support from the EU, even though Catalonia is a strong supporter of Europe and the eurozone. Some observers state that a lot will depend on what happens in Scotland. The outcome of the possible voting of the Scots may change the entire political landscape for the Catalans.

For the group of students (studying psychology, political science, anthropology, history, public administration, criminology, international studies, and education and child studies) this visit to Barcelona proved to be an interesting and valuable experience at the end of their three-year honours' programme. 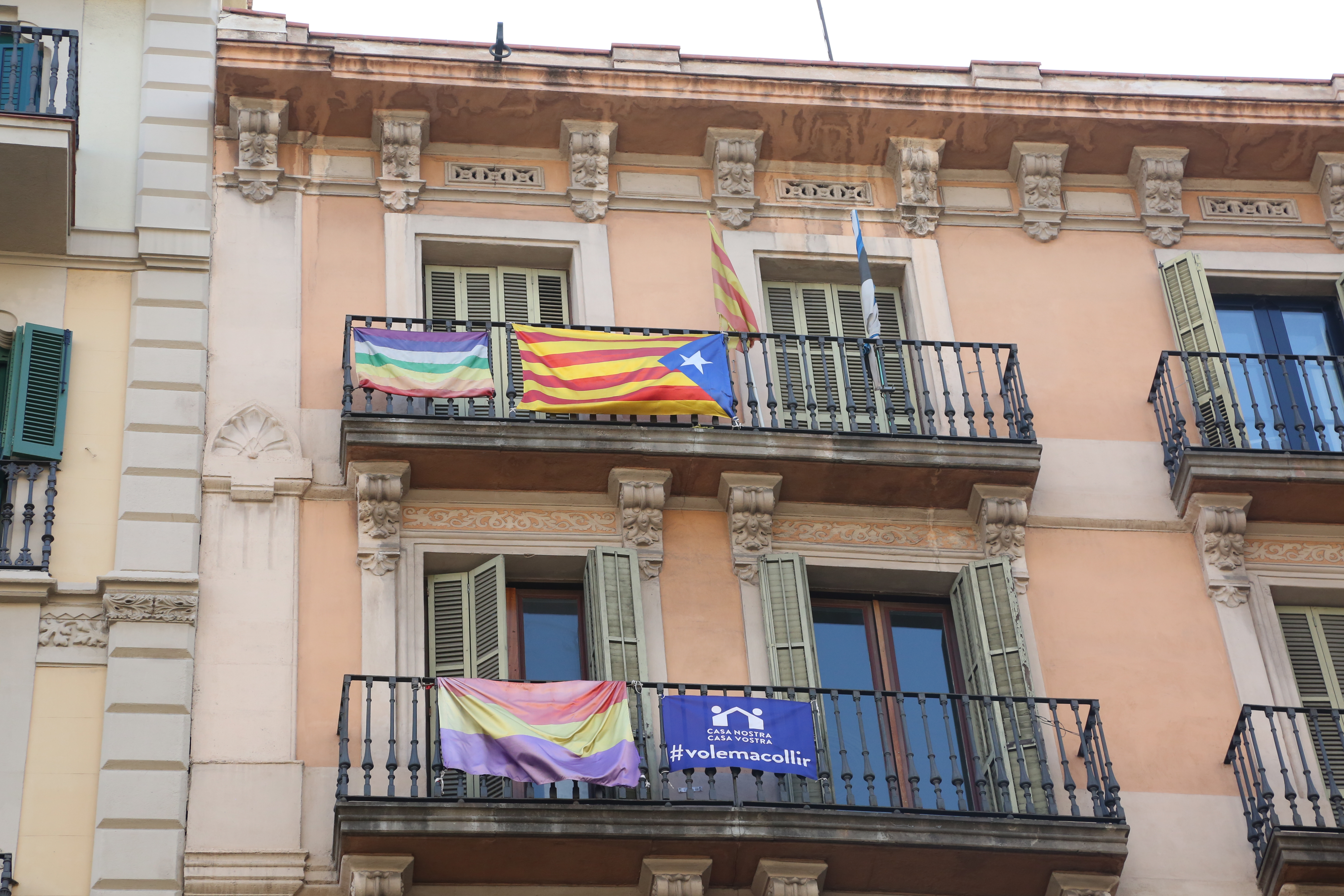 Very interesting student experience. Thank you for sharing. I've added this to some class notes on the <a href="http://www.livinganthropologically.com/anthropology-2017/is-nationalism-bad/">future of nationalism</a>

What a great overview of our visit and studies in Barcelona! And yes, following the developments toward the referendum with particular interest...