Extraction of subterranean wealth is a hot issue in the Netherlands, and elsewhere. How do we anthropologists contribute to the field of research and the public debate on mineral and gas extraction?

The annual conference of the Dutch Anthropological Society (Antropologen Beroepsvereniging, ABv) took place on May 29, in the recently inaugurated Research Center for Material Culture in Leiden. The theme of the conference was 'Resource Wars and Public Anthropology'. The decision to focus on mining was inspired first and foremost by the Year of the Mines, celebrated in 2015 on the occasion of the 50th anniversary of the closure of the coalmines in Limburg. In February the annual Dutch anthropological documentary festival Beeld voor Beeld had already dedicated part of its programme to mining, with an emphasis on the heritage of mining in the Netherlands.

The anthropology of mining

The ABv enthusiastically built on this attention for mining. Mining is not merely history in the Netherlands: with the current debate on conventional gas (Groningen) and on the contested plans for shale gas extraction in several parts of the country (de Wadden, Zeeuwse Eilanden, Noord Brabant, and Noordoostpolder), it is very much part of the present and the future. Anthropologists are actively engaging in public debate, and mining appears to be an important issue where our discipline can contribute.

In the Netherlands, but also internationally we see a boom in the anthropology of mining, not least because large-scale mining has recently moved into ‘remote’ areas that were considered the preserve of anthropologists (Papua New Guinea, for instance). Many anthropologists have witnessed members of local communities, with which they have longstanding relationships, becoming entrenched in relations with ‘global’ resource extractors. This has led to debate among anthropologists: should we side unequivocally with local communities, or should we try to understand the complexity of this new arena with more academic distance? Currently, anthropologists are looking for ways to engage in the minefield of company-community relations in different regions in the world, and their knowledge may be used in public debates on the contested terrain of extracting resources.

Where do anthropologists stand?

The participants at the annual conference were not just anthropologists, but also activists, employees of NGOs, and policymakers. The keynote speaker, Kim de Rijke (University of Queensland) catered for such a diverse audience with a lecture entitled: 'Where do anthropologists stand? The challenges of fractured ground Down Under.'

The lecture served a double purpose. First, it discussed how anthropologists position themselves in the arena of company-community relations. Taking the case of Australia, Kim de Rijke showed how anthropologists often act as expert witnesses in land claims by aboriginals in areas where mining takes place. Since this task is defined by the legal framework and the ways in which the Australian state acknowledges ‘tradition’, anthropologists dispute whether this applied anthropology is valuable or merely perpetuates injustices and the interests of powerful groups in society.

Secondly, Kim de Rijke’s expertise on the extraction of unconventional gas served to inform the audience on what ‘hydraulic fracturing’ (‘fracking’) is, and how public responses to this new form of resource extraction can be investigated. Anthropological research should take into account specific regional histories of natural resource use, as well as existing practices of land use and of tapping into underground resources (e.g. pumping up water for agro-business in Australia). 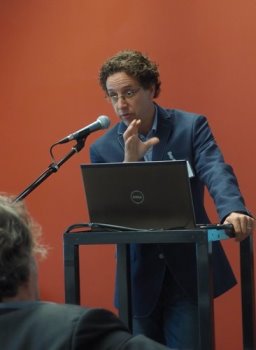 The power of Dutch public opinion

This lecture laid the groundwork for a series of workshops: two exclusively on mining and others on broader issues within Public Anthropology. One of the mining workshops was concerned with the public debate in the Netherlands; the other dealt with the moral predicaments of anthropology on mining more generally. The workshop organized by Elisabeth Rasch (Wageningen) focused on recent discussions on shale gas in the Netherlands. The panel brought together representatives of Tegengas, a collaboration to resist exploration for shale gas in the Noordoostpolder, Milieudefensie (Friends of the Earth Netherlands), and the anti-shale-gas coalition Nederland Schaliegasvrij.

The question of power featured prominently in the discussion: the strong position of the extractive industry and the Dutch state’s dependency on revenues may limit the scope for effective resistance. What are the characteristics of possible collaborations in the camp of both supporters and opponents to plans for shale gas extraction? The landscape of social movements can be surprising: the RABO Bank, with its vested interests in the agricultural sector, sides with opponents to shale gas exploration. The social dynamics in this arena constitute an important anthropological terrain for understanding public concerns about accessing underground resources, as well as for positioning our anthropological work in relation to social movements and public debate.

The anthropologist as knowledgable mediator

The workshop entitled 'The Anthropology of Mining: A Moral and Methodological Minefield?' pursued this discussion beyond the Dutch borders. Northern anthropologists working in the Global South have a peculiar position as ‘experts’. Mining companies may see anthropologists as experts on local communities’ affairs and solicit their ‘grass root’ knowledge to better ‘manage’ conflicts. Members of local communities may think anthropologists are knowledgeable about the ins and outs of companies and international standards of human rights.

The panel discussed options for brokering knowledge: informing communities as well as translating ethnographic data for policy purposes. Possibilities and predicaments appear to depend upon the way the public sphere is organized: Is the field of mining highly polarized? Are civil society organizations strong? Are local communities already connected to wider international NGOs? A comparison between the arena of public struggles in Latin America and West Africa proved highly relevant, not just for the anthropology of mining, but also for Public Anthropology more generally.

Extraction of subterranean wealth is a hot issue, and the ABv annual conference showed the anthropology of mineral and gas extraction in the Netherlands and in the Global South as an interesting new field of research with remarkable moral and methodological predicaments. It brought home how anthropologists actually contribute to public debates and how research in this field helps us to reflect on the current character of our fascinating discipline.

dear Sabine, thanks for your interest. sounds great! looking forward meeting you, gerti

Thanks Gertrud for your comments. I agree that we should look at the differences in local receptions of mining operation. I would be very interested to engage in cross-regional comparison. Your interest in the Arctic is most relevant to the network of colleagues Kim de Rijke and I are part of. I will send you info on a panel Kim de Rijke will be organizing at the Society for Applied Anthropology Conference in Vancouver March 2015. Perhaps that would be a good occasion to meet and team up. All the best, Sabine Luning

This is a topic and research focus with extremly high relevance; in particular to understand human relations to the material environment considering also the "subsurface world"; furthermore, community-industry-politics relations: however, besides the approaches mentioned above, it should be also considered that indigenous / local people are highly diverse and not all are necessarily protesting, many groups are welcoming mining activities.
Not only the "global south" is a hotspot for resource extraction; also the "global north" - the Arctic.

Watch out for initiatives in Arctic extractive industry and community research; would be great to engage in a cross-regional dialogue

Economic change is often seen as being controlled by policy-makers and big business only. However, in the ongoing aftermath of the 2007/08 economic crisis an increasing number of people are implementing new economic practices in their own localities.

Data management and ethics: A discussion between two Leiden anthropologists

Anthropologists have important insights to add to the public debate about data management. Come join the discussion on our institute’s position paper on October 26th. Here we share some thoughts on ethics, ethnography, and data.