Beards and holy sites: Competing over True Islam in Kyrgyzstan

Who has the right to wear a beard? Which holy sites are fit for worship? Competition over religious symbols in Kyrgyzstan is deeply intertwined with the political and economic turmoil that has swept the country since the breakdown of the Soviet Union.

It has been 15 years since I last set foot in Kazïbek, the last village before the Chinese border in Kyrgyzstan. As I walk towards the house where I lived during the harsh winter months of 1996, I marvel at the positive changes that have occurred since that time. Back then, the shock of the collapse of the Soviet Union was felt in every household. The abrupt discontinuation of the Soviet infrastructure left most people unemployed and unable to cultivate their now privately owned soil. Sometimes there was no bread to feed the children. But today I see tractors, neat rows of potatoes, renovated houses, village shops and colourful playground equipment. Signs of engagement and hope.

After the dissolution of the Soviet Union, Kyrgyzstan opened its borders to anyone who would help restore the economy through aid or investment. The influx of Western, Asian and Middle Eastern investors brought along a large variety of cultural influences. Dress styles, entertainment and ideologies from America, Korea, Turkey and Saudi Arabia entered the social space that emerged from the ruins of Soviet structure. A long-term consequence was an increasingly fierce debate over the shape of true Islam in Kyrgyzstan.

Globalised popular culture was easily adopted by those for whom Muslimness was barely more than a part of their ethnic identity. However, missionary Muslim sects attracted many young people, who turned to prayer, fasting at Ramadan, pilgrimage to Mecca, wearing beards and hijabs. At the same time, the ongoing nation building project intensified advocacy for true Kyrgyz traditions, a discourse in which Kyrgyz Islam is integrated into a shamanistic perspective. The fierce competition over the true form of Islam is fought out over outward symbols. 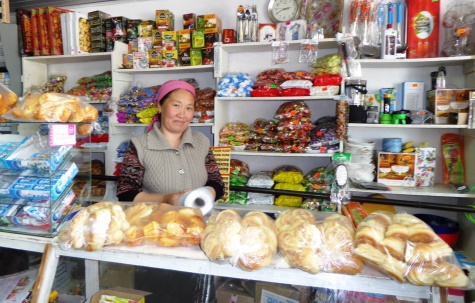 Unlike in 1996, I see young heavily bearded men in the streets of Kyrgyzstan. Still the exception, the bearded men inspire antipathy among most of my informants. The young men, who are called fundamentalists by some, are not so much feared as resented. My informants disapproved of the breach of ‘true’ Kyrgyz cultural traditions. ‘Kyrgyz men are not allowed to wear a beard before their father wears one. They need to have the permission of their elders to wear a beard’, a friend told me, ‘so you see, these young men are doing it all wrong.’

The imam of the village Kazïbek had a similar approach. Dressed in a European-style suit and a Kyrgyz felt hat (kalpak), he explained: ‘There are too many outside influences these days. We do not need to adopt Arabic traditions, such as beards and hijabs, to be true Muslims, as the sects want us to believe. Islam is the last of the world religions, and it is meant for all the people in the world. You see, Islam has incorporated all that was right in the old religions, but it denounces all that was wrong.’ While the imam endorses an Islam that is integrated into Kyrgyz traditions, he draws the line at what he considers pre-Islamic beliefs. ‘The main point is that we recognise God above all. As long as we do not worship the sky, water, stones in the shamanistic way, we should stay true to our own traditions.’

In the course of the evening I spend with the family I lived with in 1996, we receive a visit from a friend of the youngest son, who is now head of the household. The friend has a long beard, and his wife is slightly more veiled than the other women in the house. While we sit together for tea, we get involved in a discussion on homosexuality, which the bearded friend claims to be the West’s biggest problem, as it will lead to our extinction. He met many converted Europeans on his hajj to Mecca, and it is clear to him that Europe is in a deep spiritual crisis.

Before they leave, he proposes to take a photo together: ‘So you can show Dutch people that they do not have to be afraid of men with beards. Are you afraid of my beard?’ I admit that it did scare me when I first saw him. His looks reminded me of the images of terrorist fundamentalists. He laughs and says: ‘You know, it would be a disgrace for us to commit a crime. Our beard is a sign of our respect for Allah, how can we murder anyone when we carry this sign?’ Compelling as the argument sounds, I am not convinced. 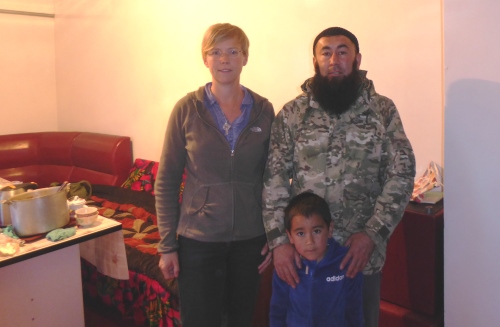 "Holy sites are not God"

Another site of contestation are the holy places (mazar), such as graves of sages, particular hills and water wells that are scattered across the Kyrgyz landscape. After the collapse of the Soviet Union, interest in Kyrgyz spirituality was fostered by the government as a source of national pride. The orally transmitted Manas epic functioned as a focus point for this revaluation of Kyrgyz spiritual values, in which the mountainous landscape of Kyrgyzstan featured prominently. A discourse in which nationalism, spirituality and the landscape were deeply intertwined provided fertile soil for intensified mazar visitation.

The resurgence of visiting holy sites has been accompanied by Islamic denunciation of this practice. The imam of Kazïbek says: ‘Holy sites, water, the wind, stones – we worshipped them when our beliefs were shamanistic. But they are not God. Chech Döbö is not God, we should not worship a hill.’ Chech Döbö, a hill that stands out in the landscape, is considered to be the grave of Almambet, the closest friend of the epic hero Manas. People visit it in the hope of receiving relief from pain and anguish.

Together with Talantaalï Bakchievhas, narrator of the Manas epic, and a tawïp who hears the words of the atalar (ancestral spirits), I visit a mazar in Ak Suu . The mazar consists of a natural well surrounded by trees. When we descend to this little oasis of peace, we sit down, place bread in front of us, and recite a sura from the Koran. Malik passes on the words of the atalar concerning our health and future, Talantaalï narrates a part of the Manas epic and we drink from the well. In a combination of Islamic, traditionalist and globalised spiritual rituals, both Talantaalï and I experience healing. When I repeat the imam’s words to Talantaali, who dreamt of the hill often, he shrugs and says: ‘Muslims have always visited holy sites. What is it that Muslims do when they go to Mecca on their hajj? What is the Kabaa but a mazar?’ 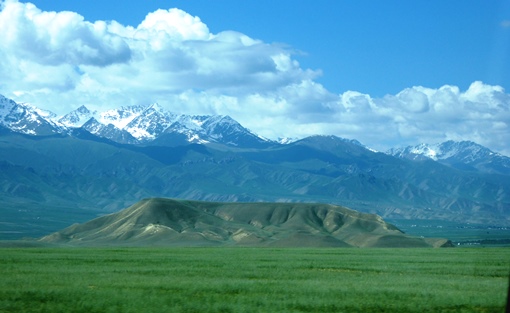 Beards and mazars in a global perspective

With his keen observation Talantaalï exposes the arbitrariness of the rejection of religious symbols. In a similar way, Kyrgyz traditionalist reject Muslim beards, but respectfully address their elders as aksakal (‘white beard’). It is not the symbolic behaviour itself that gives religious symbols their urgency, but their connection to global communities. Communities of devote Muslims, neo-shamanists and Kyrgyz nationalists provide social spheres that people identify with, or oppose. They function as platforms that strengthen people’s sense of having the right outlook on life – and at the same time they sharpen the divisions between these groups.

In this competition over truths, ideas that are meant to propagate joy, peace and caring are distorted, and acquire the potential to create conflict and suffering. It is an eternal tragedy, always accompanied by the hope that this time, the good will prevail.