This October, the Nordic Anthropological Film Association (NAFA) held its annual symposium and filmfestival. I immersed myself, catching up with recent films, and debates on the various relationships between film, anthropology and viewers.

This year the NAFA symposium focused on the relationships between contemporary ethnographic film and documentary cinema. A good excuse for me to try and describe developments as I perceive them, especially for those who are not familiar with the almost separatist movement of visual anthropologists.

In the early years of documentary and ethnographic film, up until the 1960s, so-called non-fiction film was highly didactic. An off-screen voice with authoritative timbre of an unknown, invisible - usually male – person, would explain how the viewer should perceive and understand the images shown. This approach to constructing audiovisual realities is often typified as ‘voice of God documentary’, and can still be seen on for instance National Geographic or Discovery Channel. This style is in fact what ‘the man in the street’ thinks documentary is and should be: objectifying, reliable, and factually informative. The image serves as evidence for the text. If you switch off the sound you miss what the illustrated lecture is telling you. For scholars, this style of film or rather tv program making is adequate for situations in which much textual information is needed. A style useful for those anthropologists who want to explain complex social situations within the film itself. As a viewer you need to pay attention mainly with your ears. This subgenre is not very cinematic and nowadays seems in the minority at ethnographic festivals; NAFA did not program any.

Still taken from 'Noise that brings money' by Konrad Pilot

In European fiction film a rebellion against all authoritarian cinema de papa burst upon the scene in the late1950s and early 1960s with the French New Wave movement. Illusions of continuity and other naturalistic constructions of realism – even in fiction film - were purposely broken with so-called ‘jump cuts’; deliberately showing where moments in time and space had been interrupted to move the camera to another angle or moment in time. This ‘constructed by cinematic means’ character is not only made transparent, but even celebrated. For fiction film this approach was intended to create a kind of documentary authenticity, but for ethnographic film this practice was far less popular.

Naturalism, and for some people even realism, reigned. With the voice-over gone, priority was now given to the eye, the new documentary mantra being ‘show, don’t tell’. From now on viewers were allowed to make up their own mind about what was on display. They were given something self-explanatory to follow and identify with. Protagonists were subtitled so that they, too, could speak for themselves now, directly to the audience without mediation by voice-overs. Hence the term ‘direct cinema’.

This development led to the still hugely popular stream of so-called observational films; ‘observed’ in the sense that scenes are not staged or rehearsed. The anthropologist-film maker simply records; the direction lies in the selection of relevant moments to film. Such fairly casual hand-held filming – as opposed to using a tripod - with synchronous sound was a technical revolution in the early 1960s that anthropologists helped to develop as they felt the need to be able to film in a flexible way in the field.

This new approach to film making turned visual anthropologists into film authors. With these tools many films are since being constructed with one or several main characters the viewer can get to know and identify with. Naturalistic recording and editing styles are being applied to create the impression of ‘being there’ yourself. The lives depicted are meant to represent general issues that, ideally, are linked to social theory in separate written texts.

This type of film forms the bulk of what anthropology film festivals still put on display today. NAFA, too, seems to have a special preference for this type of film that is indirectly linked to various socioeconomic issues. A good example is ‘Noise that brings money’ (2013) by Konrad Pilot made during his MA at Tromsø. The viewer follows an innovative African entrepreneur, and the stumbling blocks he encounters are the same in many countries. An excellent film for classroom purposes, which is a major selection criterion for NAFA programming.

‘Home in Mind’ by Tami Liberman

More recent technological developments have begun to influence content, form, and viewer response through new uses of electronic and interactive audiovisual media. Several of these new approaches break with naturalist notions and other mainstream documentary film conventions regarding framing and editing. The more evocative potential of cinema is being explored, for instance in non-synch and non-linear narratives. Film makers take their inspiration from the avant-garde and experimental film movements that entered the scene from the1920s onwards.

This attitude may seem artistic, and it is: “Art, anthropology and film have a lot in common these days” was indeed an unchallenged remark at an NAFA debate. This may sound revolutionary to ‘mainstream’ anthropologists, but it should not for the tribe of visual anthropologists. After all, it is this specific hybridity that has been on the research agenda from day one: in 1948 the very first visual anthropology convention under Le Roi-Gourhan at the Musée de l’Homme in Paris stated that anthropological film should tie cinematic language to scientific rigor. Still a valid motto.

In my view it has taken too long before a wider variety of cinematic options finally entered visual anthropology. In documentary film making this happened much earlier thanks to the likes of Chris Marker, Harun Farocki, and others. We now finally have our own experimentally inclined practitioners, with scholars such as Alyssa Grossman, Jennifer Deger, Stephan Koehn, Eva la Cour and probably others I am not yet aware of.

Regularly their audiovisual research adventures do not end up in a film or audiovisual essay for the cinema, but rather as installation for a gallery or museum. That means that for the first time since the 1960s in visual anthropology a new invitation to the viewers is being created, i.e., to play a more active role in the sense-making process. They need to do more than just watch and listen. The viewer’s own memory, personality and experience is evoked. Sadly, many anthropological festivals cannot yet accommodate installations, and neither could NAFA. But that did not mean there was nothing new on view in the cinema cave.

Captured from the computer for the big screen was ‘Home in Mind’ (2013) by Tami Liberman. She explored the cultural experience of ‘home’ in the entirely constructed world of Second Life. A next step could be for users to do their own explorations via new and interactive media during symposia and festivals. Would this make the anthropologist more a facilitator than an author? What will be the next shift in the relationships between researcher, subject, and viewer inside the anthropological media constructs? 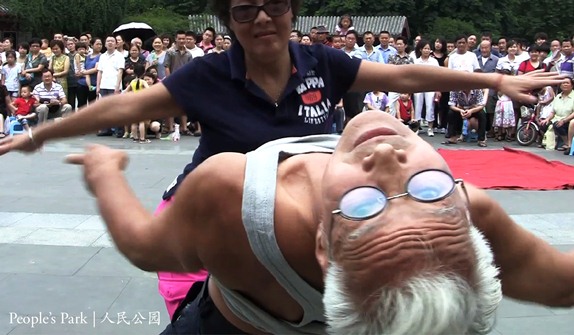 Another current trend in visual anthropology taking its cue from fiction film (Sokurov, Tarr, Rivette, Tsai) is to take the notion of ‘duration’ further. This is what various scholars at the Sensory Ethnographic Lab in Harvard do. One of its graduates, J.P. Sniadecki, had a retrospective of his work during this NAFA festival. He by no means only sticks to long-duration cinema, but his film ‘People’s Park’ (2012) does consist of a 78-minute single take amidst dancers and audience in a Chinese public city park. Sniadecki’s ‘single-shot cinema’ is not like that of filmmaker Leonard Retel Helmrich, who follows and creates social drama with his camera, but rather like a calm Tai Chi meditation.

Sniadecki moves beyond conventional framing, editing, and gazing in order to provide viewers with a more sensory experience. Various of these Harvard films stem from anthropology, but are now entering mainstream cinema and are being perceived as innovating documentary film language (‘Leviathan’ (2012) and ‘Manakamana’ (2013)). Thanks to NAFA I was able to get to know the sometimes lesser known but certainly not less interesting scholarly film works by Sniadecki.

After this experience more questions keep popping up: Will these new developments keep the ‘visual’ tribe separate from so-called mainstream anthropologies? Or is imagery going to enter academia more often? What new ways of acquiring ethnographic knowledge does it bring? I am looking forward to hearing your ideas on this and am eagerly awaiting developments.

Very Interesting work, Janine! Great job! Your BIG sis forwarded me your email and updated us on your recent work. Glad to hear all is well. Take Care!

It was really nice reading it, Janine, and you made me very curious about some of the films. I am wondering, if it's possible to order them through the library(?)

Really nice review Janine! I saw manakamana at the New York FF several weeks ago and loved it