When dreams shape our day

Dreams appear only to the individual, but seem to come from a source outside our social selves. Do we allow them to shape our days? Comparing Dutch and Kyrgyz social contexts, we understand how profoundly cultural these processes are.

Dream theories in the Netherlands

Dreams confront us with imagery, experiences and desires unknown to the conscious, bounded and socialised self that we regard as ‘me’ in the daytime. They seem to come from outside our daytime self. Dream contents can startle us, surprise or terrify us. Or simply make us laugh once we are awake. One way or the other, dreams have the potential to shake up our usual frames of mind and for precisely that reason, they call for active sense-making. Although dreams appear as personal, intimate stories that are performed for the dreamer alone, making sense of dreams is a profoundly social act. The first step in this act consists of the creation of dream theories that give direction to the way we relate to the dreams’ contents. In the Netherlands, we may distinguish three types of dream theories.

1. Images of a dutiful brain

Congruent with the materialist worldview that dominates much of public life in western societies, we find the idea that dreams are produced by our brain as it is de-stressing itself. The images are created by firing neurons that were stimulated during the daytime, and the sometimes absurd tales are an attempt of our dutiful prefrontal cortex to compose a coherent story from what is offered. In this frame, dream contents do not call for interpretation.2.

A second type of dream theory originates from the field of psychoanalysis. Within the private confinements of the psychotherapy setting, safely sealed off from public scrutiny by claims to professional confidentiality, dreams are treated as manifestations of our deepest desires, as attempts of suppressed parts of the psyche to break through the censorship of our social self. Seen in that way, dream images may be cause for embarrassment and even shame, and can only be explored in a setting outside the usual public sphere. At the same time, dreams are considered a powerful means to reduce psychological suffering and uncover authenticity, if one succeeds in integrating the suppressed elements into the conscious, socialised daytime self.

3. Message from the spirits

A third view regards dreams as messages from the supernatural world. Where once the idea that God spoke to us through dreams was integral to dominant dream theories in the Netherlands, in the 21st century this idea has become marginalised and often ridiculed. Still, the idea that certain dreams are sent by God, angels or spirits thrives in many religious and spiritual circles. 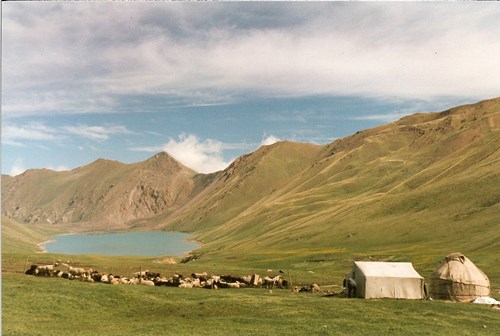 Kyrgyzstan: Manas epic and forces beyond ourselves

The notion that dreams stem not from our bodies, nor from our psyches, but from a force beyond our self may be marginal in the Netherlands, in Kyrgyzstan it is a common explanation of the phenomenon of dreaming. I found this out early in my 1990s field research in the post-Soviet Central Asian republic. While researching the social settings of the oral Manas epic, I stumbled upon many dream stories. Many Manas narrators told me a story of a calling dream they had received around the age of 12. In this dream, they met the characters of the epic, who offered them something to eat and drink and requested them to become reciters of the epic. On waking up, the epic chant would flow out of their mouths effortlessly. During their lifetime, most Manaschïs continue to receive dreams in which they learn new episodes of the tale. Without dreams, Manas recital becomes hard work and one can never achieve the intensity of ‘real’ dream-inspired narration.

Also in the epic itself, dream stories abound. Even the very first tale of the epic already takes us to a dream experience. This is the story of Jakïp, who is fifty years old but childless. One night he dreams of a large bird of prey. When he shares the dream with his wife, she confides she had a similar dream. At that moment, Jakïp‘s second wife enters the yurt and tells the others about her dream of a bird of prey. All three know this means a child is on its way, but as the wives are past their childbearing age, it seems an unlikely omen. Still, the wives manage to persuade Jakïp to throw a large feast in the hope of receiving a positive dream explanation from the elders, along with their blessings. This is a requisite for the dreams to come true. The feast is sumptuous, they receive the elders’ blessings, and within a year, Manas is born.

In the Manas tale, we find the intriguing idea that a foretelling dream can only materialise after it has been explained and blessed by people of importance. This recurs in the practice of Manaschïs who have their calling dreams blessed before they can safely take up their calling. The idea that daytime interference influences the actual outcome of a dream is all-pervasive. When asked to explain someone else’s dream, people will carefully search for a positive turn to potentially unsettling omens. For the same reason, a dreamer will carefully select someone they have good relations with to submit their dream for interpretation.

Messages from the supernatural world are thus no individual matter in Kyrgyzstan. Although dreams are seen to have the potential to influence the daytime world in powerful ways, they can only do so when they are integrated into the social world. Where psychotherapy seeks to integrate dream content into the socialised self, Kyrgyz dream work seeks to integrate dream content into the self’s social world.

As in the Netherlands, in Kyrgyzstan too, more than one dream theory is applied. In socialist times, belief in a spirit world was often rejected as backward, in similar ways to it being seen as unmodern in today’s capitalist times. From these perspectives, the dream theory I described above is cast aside with a similar ridicule as in the Netherlands. But even more tension arises when these ideas are viewed from an Islamic perspective. Although the Kyrgyz have considered themselves to be Muslims since the 19th century, after independence from the Soviet Union, Kyrgyz forms of Islam has increasingly become seen as an syncretic with shamanism. In this perspective, interacting with spirits is considered against true Islam and heavily discredited. This means some people will have to go underground to act upon the messages they received.

Although dreams appear only to individuals, making sense of them is a social affair. It is our social setting that influences whether we take dream contents seriously or not. If we do take them seriously, dream interpretation and the actions we take upon them hinge on social interactions. The Kyrgyz requisite to invoke other people’s dream interpretation can be seen as a profound understanding of the deeply social nature of the potential of dreams to shape our days.

Thank you for your comment, Zane. You raise a very interesting point! There are many instances where dreams during fieldwork actually influence how we understand the social situation we have immersed ourselves into. I remember many confused and confusing dreams, and discussing them with my informants led to new understandings. Also telling my key informant about my intense dreams of black panthers increased our rapport: panthers turned out to be his guardian spirits. Apart from that, my own ideas, interests and insights must have been shaped in part by my night time adventures. It is worth investigating!

Lovely blog post! On a related note- it would be fascinating to learn about your own dreams while in the field and how making sense of them happened in relation to all the different contexts that you are engaged with. I am asking because I myself have very strong dreams upon entering and also leaving field, thus I really enjoyed the chapter by Michael Jackson in The Psychology and Anthropology of Fieldwork Experience edited volume and would love to learn about other experiences! &#123;Jackson describes how his dream was interpreted by the Kuranko elders and how that interpretation assured him about their attitude towards him, while he himself seems to be approaching the dream more along the lines of 'deepest desires/fears'&#125;