Europe is said to be endowed with creativity because of its migrant youth, mixing heritages. But cultural diversity can only be a source of innovation if lost roots are dug up. Can new technology and museums provide help?

In 2010 I stumbled upon a nice topic for a documentary film, or so I thought. Now, four years later, the original plan has developed into a research project using digital technology and design thinking. Together with Dutch-based partners Waag Society and Rijksmuseum Volkenkunde it became embedded in a larger consortium under the acronym RICHES. Let’s go back to where it all began.

When on holiday in Marrakech I visited Museum Tiskiwin and found that some Dutch students were to arrive for an internship, to investigate the Amazigh components of their multicultural backgrounds. Born in the Netherlands, from Morrocan descent, they wanted to – literally – get in touch with the world their parents grew up in. They felt part of that world, albeit too ephemeral: it had dropped out of sight due to migration.

I returned during the internships, with a camera, and made sure to be filming when the mother of one of the students also came over to visit. She was invited to tell her daughters about some of the objects on display. At once, she shed many years. The objects in turn also came alive. In one room a tent is exhibited, and the old lady immediately sat down and stirred in a bowl as if she was preparing couscous. Her body automatically remembered the accompanying movement. One daughter, Latifa, took a picture. 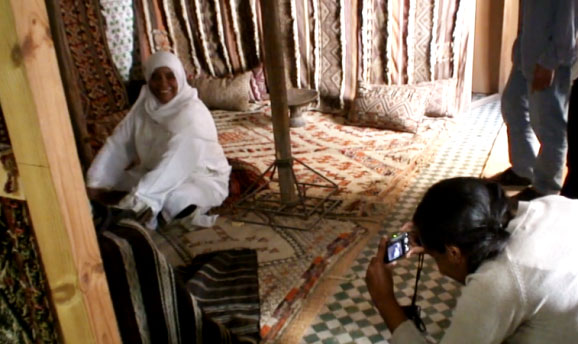 Latifa taking a picture of her mother at the Museum Tiskiwin.

Why did Latifa choose this moment to freeze? I still need to ask. In any case it is a moment in time when cultural heritage is transmitted, elicited by material objects: stuff that disappeared from view due to migration but has fortunately been collected – in this case with the utmost care and the vision of Bert Flint.

Many families, including mine, are not so lucky and need to find other ways to fill various gaps in our heritages. Few of us inhabit the same world our parents lived in, but migration creates a bigger divide in time, space, and culture. Not everything will be gone: intangible heritage such as food, customs, and values travel with us, although in another place they are surrounded by different dominant heritages. Most migrants end up as ‘minority’ elsewhere.

So chances are that you find yourself operating from a cultural niche, and a new generation has little or no idea where their parents or grandparents originated from. Does it matter? Apparently, yes. The regular generation gap deepens due to insufficient possibilities - and reason for - transmitting cultural continuity. The children grow up in a different, possibly even contrasting, world that on top of everything else may expect assimilation rather than mutual integration. Part of the personal past is at risk of remaining unknown and sometimes denied.

Such cultural divides and deficiencies are believed to be an important cause of chronic stress, responsible for an unusually high risk for migrants of developing psychotic disturbances. Part of the problem is, according to some, a lack of cultural self-recognition or self-identity.

It is here that tangible and intangible cultural heritage, our cultural inheritance, can be of value; not in the sense of preserving it, but because it can be modified under new circumstances. Culture is shaped in practice, and this will be an all the more dynamic process when elements from various backgrounds are mixed. In order to stand firm it helps to know your cultural heritages, and then create your own mix instead of getting mixed up. 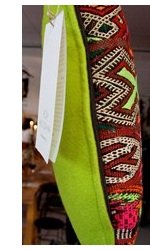 Another young Dutch-Morrocan woman, Mina Abouzahra, describes this process of reinventing herself between cultures without any role models at hand as ‘combining two hearts’. She does this in a very litteral manner through the cushions she creates.

Every now and then Mina visits craftspeople in various Morrocan regions to select special handwoven fabrics. Back in the Netherlands she then combines these colorful textiles with minimal contemporary design and modern production technology. On the label it says: ‘… two contrasting sides, symbolising tradition and innovation’ [my translation].

In my view Mina is a living example of the thought that immigration countries can look forward to a bright future, in line with the UNESCO declaration on cultural diversity, especially Article 7: ‘Cultural heritage as the wellspring of creativity’. 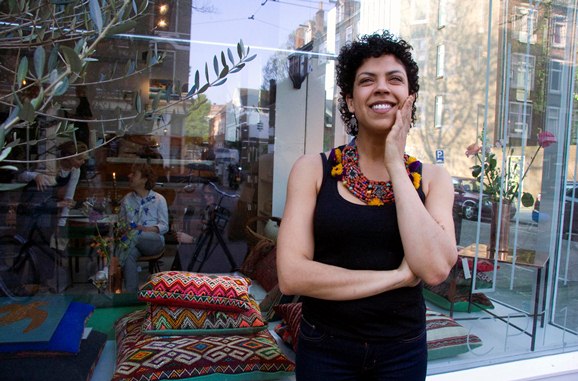 Mina Abouzahra in front of a window with her ‘combining two hearts’ cushions.

However, not everyone is as creative as Mina, nor is the country of ancestral origin always accessible. How then could young people get in touch with the lost (or detached) parts of their cultural heritage?

In the case of Europe, its museums are of course chock full with the collections of material from its colonial history. But could museums possibly do more than preserve objects in glass cases? And what about postcolonial migrants; is their stuff around as well?

New (media) technology and theory may come in handy, especially when combined with participatory approaches. Digitalisation can improve accessibility, and interactive platforms - of whatever kind - can facilitate so-called third spaces or ‘living labs’. Museums may become fertile grounds for ‘experience curators’. In such carefully designed spaces and processes, both relative newcomers and more settled inhabitants might enter into different intercultural dialogues than they usually do.

Such are the utopian directions for Europe’s future that are being explored in the project I’m currently involved in. This time I won’t be the film director deciding who and what is being portrayed and presented to an audience. Apart from observing as a researcher at meta-level, I will at best become a fellow moderator of designed processes in close collaboration with the intended visitors. This method will be new to me and is described as users-as-designers.

Will my role as a visual anthropologist change, and if so, how?