Economic change is often seen as being controlled by policy-makers and big business only. However, in the ongoing aftermath of the 2007/08 economic crisis an increasing number of people are implementing new economic practices in their own localities.

The increased financial and environmental instability, currently facing many people across the world, encourages questioning of mainstream economic practices. Many now argue that we cannot continue exponential economic growth on a finite planet, that having more is not always better for us, that, in fact, ‘enough is enough’. Practical examples of alternative ways to organise the economy are increasingly relevant to these contemporary debates. The aim of my own ethnographic research was to investigate what one of the proposed alternatives – economic localisation – looks like in practice.

This aim led me to spend three months living in the small market town of Totnes, in the west of the United Kingdom. Totnes is known by many for activities which place it on the “front line of cultural dissonance”. The town is the founding home of Transition, an activist movement which identifies community-level responses to the challenges of peak oil and climate change. Transition promotes economic localisation as one key route towards a more resilient and environmentally sustainable society.

The initial aim of economic localisation for Transition is to lower the environmental impact of necessary economic processes, such as food production, housing, and energy use. This can involve both making materially intensive production processes more local and also lowering the environmental impact of consumption wherever possible. I saw many examples of localisation in Totnes, for example through projects focused on transitioning to more local food supplies and lowering the impact of local energy consumption. 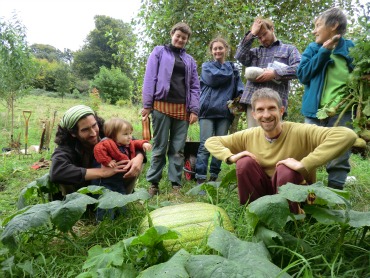 Those involved in Transition often caution against oversimplification of the term localisation in relation to their work, highlighting that Transition would not like to move all economic interaction to the local scale. As one person explained to me during my fieldwork: “Localisation is not the answer on its own; it needs to be set within a wider framework that actually acknowledges natural systems.” This analysis suggests that if the cost of environmental destruction was adequately included in economic metrics, greater economic localisation would be one expected result.

As well as being part of a pro-environmental strategy, localisation is also seen by many Transitioners as a route to making Totnes’ economy more overtly social and community-based. People grow their own food and shop more locally both because it is more sustainable, and because it connects them to their local area and others in their community. Through projects such as the Totnes Local Entrepreneurs Forum there is encouragement and investment in local businesses working towards sustainable solutions. This type of engagement also enables people to form new networks and feel more connected to their vibrant local economy.

The activities refute the idea of the economy as something remote and impersonal and instead allow people to actively reclaim their identity as social beings within the economy. People today have less faith in an economic system defined by large banks and remote government policies. In Totnes I saw people who want to feel part of the economic successes in their communities, within the course of their daily lives. From this perspective economic success does not mean rises in GDP: It means higher levels of overall wellbeing for people and for the planet that sustains our lives. Although Totnes is not a homogenous place, and people in the town display a variety of views on economics, there is a strong sense that those involved in Transition in Totnes are aiming to actively create a positive alternative to the current system.

What most appealed about the Transition approach is that it is fuelled not only by decrying what is wrong with society and our current economic system, but also by focusing on embodied daily practices being used as a channel to challenge the status quo. For as designer Buckminster Fuller famously once said, in a quote repeated to me a few times while I was living in Totnes: “You never change things by fighting the existing reality. To change something, build a new model that makes the existing model obsolete.”

Anthropological research is by its nature interactive and collaborative. I really appreciate being awarded the Speckmann Prize for my thesis, and I would like to take this opportunity to thank all those who made my thesis possible in the first place: This includes all those in Totnes who participated in my research, all those involved in the Transition movement who helped me so much along the way, the Network of Wellbeing (NOW) for all of their support, and, last but not least, my excellent supervisor Marianne Maeckelbergh for all of her valuable advice throughout the whole process.

On February 17th Florence Scialom was awarded the Speckmann prize 2014 for her MA thesis "The Challenges of Embodying Economic Change: Responses to Localisation Practices in Totnes, United Kingdom." The MA Speckmann prize is awarded annually by the Institute of Cultural Anthropology and Development Sociology for the best MA thesis.

For anyone who has found this blog post of interest, you can now find my full thesis available online here: http://www.transitionresearchnetwork.org/embodying-economic-change.html

Thanks so much for any interest!

Thank you so much for your interest in my thesis! It isn't currently available online, but if you email me (via florencescialom[at]gmail[dot]com) I'd be happy to share with you and answer any questions.

I look forward to hearing from you.

I'd very much like to read your thesis. How can I access it? Did it in any way address the question of the effect of economic localization on poverty reduction?
Thank you.

Thanks so much for your kind words - they're much appreciated :)

We're missing you here in the Netherlands, but hope all is going really well for you in Mexico! Hope to catch up some time soon!

Wow Flo congratulations! I'm so proud of you :)
Nothing but credits and good words; if anyone would deserve this price, then it would be you :)

Thank you very much for your interest. I have emailed you to follow up, so I'll look forward to hearing back from you via email.

Hi Florence,
We would like to interview you about your MA thesis for the Leiden University Newspaper Mare. Can you contact me by e-mail? -> redactie@mare.leidenuniv.nl

Thank you very much for sharing - I look forward to taking a look at these links/ resources.

All the Best
Florence

There is also a NO money movement happening around the world: