Positioning Science: Post-Truth, Back to the Facts, or Morality?

The authority of knowledge, science, and academic institutions is not as self-evident as it maybe was in the past. How to position as scholar in a post-truth world? Should we deal with these challenges by simply studying facts, as some scholars argue?

There is lively debate about the authority of knowledge. Several movements within universities argue that academic knowledge is a form of colonisation. At the University of Cape Town, one of Africa’s highest-ranking universities, there is a heated conflict about decolonising universities and decolonising the mind. Movements like TransformUCT argue that knowledge, research, and teaching represent the inequalities of colonialism. In London, students at the School of Oriental and African Studies objected to a curriculum that included only European philosophers. Similar debates take place at the other end of the political spectrum: In the Dutch parliament, a majority has voted in favor of a motion instructing the Royal Netherlands Academy of Arts and Sciences to investigate the political orientation of academic researchers and censorship. The election of Donald Trump as president of the USA and the UK Brexit campaign have intensified the debate about facts and a post-truth world.

Return to the facts

Where does this leave universities and scholarship? Robert Dijkgraaf, former President of the Royal Netherlands Academy of Arts and Sciences and now President of the Princeton Institute of Advanced Study regularly addresses this important issue. He argues that trust in research and researchers is constructed on facts. Trust in researchers and research institutes is based on the revelation of facts. It are eventually facts, Dijkgraaf argues, that point to the legitimacy of and trust in academic research.

But this will not sufficiently address these concerns. One reason is that facts are boring. Academics and students are usually not interested in facts, and rightly so. We are interested in the things we do not know. What drives us is curiosity and uncertainty. We are interested not so much in facts, as in evidence. Evidence, unlike facts, is presented in relationship to a theory, an argument, or a hypothesis. We build theories and insights in order to understand something better and generate new insights. When we make a case for these theories and insights we have to support our claims with evidence. Evidence – unlike facts – always relates to a specific argument and always requires an interpretative leap. Sticking to the facts would make for very dull research and would obscure that research always involves interpretation and creativity.

Moreover, a return to the facts is not enough because there is always ambiguity about facts. This ambiguity concerns how precise facts are, which facts are important enough to spend time on as researchers, as well as ambiguities related to different philosophical positions about the relationship between facts and knowledge. This ambiguity is what makes research so interesting. It forces us to ask new questions about what it is that we see or hear, and to constantly scrutinize our methodologies. We always have debates about this: Are we measuring in the right way? Are we using valid categories? Do we need another language and other concepts to speak more clearly about what we find?

Facts – what they are and how they are made – are certainly important, but it will not be sufficient to legitimize research and convince people of the value of research. A factual approach is not sufficient, because it denies two very fundamental academic principles: that facts are boring and that facts are ambiguous. A call to return to the facts implies a nostalgia for the days when the authority of scholarship was self-evident. That will not sufficiently address the debate about the authority of knowledge. 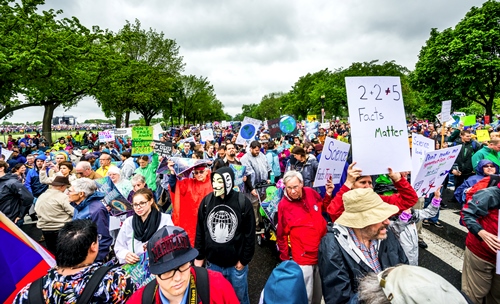 Another response that is worth considering focuses on the morality of the work we do. It asks the question: what is a good researcher? Being a good researcher puts the integrity of researchers and research institutions at the center of the debate. It highlights how important values are to knowledge. Let me give a few examples.

One of these values is speaking truth to power. This means that researchers need to show that their findings and interpretations are as independent as possible from power relations. Asking the question ‘what is a good researcher?’ shifts the focus from facts to the people who do the work and the conditions in which they work. It implies that speaking truth to power is not a statement or a promise. It implies a constant battle against attempts to oppress unwelcome research findings (see The Unwelcome Message for examples of Dutch cases).

Another morality is honesty. Honesty is different from transparency, because it makes an explicit moral commitment and forces us to realize that transparency is not a goal in itself but a means to an end. Debates and policies need to strengthen honesty, and we need to ask: how can we make honest researchers and research institutes more honest?

One can also think of being a good researcher in relation to other moral values. These moralities are already part of academic scholarship: in the ethics of research, for instance. But research ethics have sometimes focused too much on protocols, procedures, and technicalities. Instead of opening up debates, ethics have turned into an instrument that shield us from debates and legal claims.

We will not reach consensus about what makes a good researcher. But this lack of consensus need not be a weakness; it can be a strength. In the academic tradition, disagreements create an openness and provide space for a continued debate, both among academics and in the world at large. A lack of consensus means that these moralities are constantly evaluated and reformulated against shifting principles. My expectation is that a debate about what makes a good researcher and finding ways of anchoring this morality institutionally will stimulate insightful scholarship and demonstrate the importance of what we do.