My home is my (Airbnb) castle?

In Amsterdam there are over 10,500 Airbnb addresses. ‘The easiest way for people to monetise their extra space and showcase it to an audience of millions.’ Why does this ‘monetise your extra space’ resonate so well? And what about the neighbours?

My mother has new neighbours every week. They live in the flat opposite her. She knows exactly what they pay per week, even per night. She has never been inside the flat, but it looks great in the pictures: newly built and tastefully decorated. Every Thursday there is the same ritual: the balcony doors open, two or three people come out onto the balcony, look right, take a picture, look left, take another picture. The people staying there are enthusiastic: ‘We had a great time at Scott’s apartment and we would recommend it to anybody looking for a modern and quiet stay in Amsterdam!’ Or ‘The apartment is very comfortable...located in the heart of the city. And also reasonably priced.’

'A world of belonging’

Airbnb is a subject of several discussions. There is a question about what Airbnb actually is. Some suggest that Airbnb is part of a new economy, the so-called ‘sharing’ economy. Instead of buying new consumer goods, we share what we already have, but do not need. Others argue that the word ‘sharing’ is misleading and that Airbnb is simply a rental intermediary, and that it should be taxed and regulated as such. Next to this, there are websites like Insideairbnb.com, that through collecting statistical data aim to show how Airbnb affects the housing supply and affordability in cities like New York and reveal ‘The data Airbnb doesn’t want you to see!’ 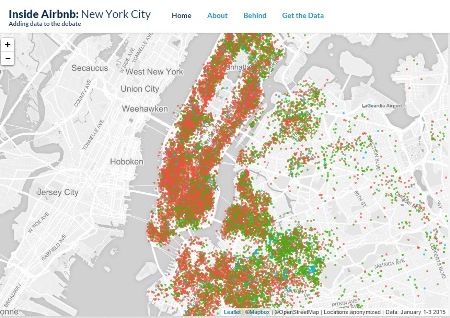 The airbnb locations on the New York city map of Insideairbnb.com.

In Amsterdam there are over 10,500 Airbnb addresses. As Airbnb puts it: ‘Whether a flat for a night, a castle for a week, or a villa for a month, (…) Airbnb is the easiest way for people to monetize their extra space and showcase it to an audience of millions.’ Why does this ‘monetize your extra space’ resonate so well? I think it’s because housing and ‘investment’ thinking were already connected.

Buying a house is often presented as an ‘investment’ and residential renting, on the contrary, as a waste of money. Seeing a house as an investment may be a combination of justifying borrowing large sums of money (this is not a debt, but an investment) and speculating on future events: buyers assume that they will sell the house for more than they bought it for. In areas that are already tourist spots, like Amsterdam city centre, this ‘investment’ thinking has been put into practice in a major way. The concept of Airbnb connects perfectly with the notion of housing as an investment, with one big advantage: it pays off immediately.

The Airbnb "Welcom home" slogan on its homepage.

My research among people who had recently bought a house showed that the neighbourhood where an apartment was located was of particular importance in determining whether or not people wanted to live there. As one person I interviewed put it: ‘I also wanted to know who lived in the neighbourhood. Who are my neighbours, who lives next door? Are they students? Are they starters or families? Of course I wanted to live next to people like me, starters. I definitely did not want to live next to students. Then you’ve bought a nice house, but you’re still woken up at all hours because they come home late. I really have been here many times at all different times of day to see what kind of people live in this street. I also rang the neighbours’ doorbell to ask them about the area. They didn’t mind and found it normal to answer my questions’.

This interview took place two years ago and, given the scale Airbnb is reaching, I now wonder whether this person would also include his neighbours’ renting out holiday accommodation via Airbnb as a matter for consideration. What this quote shows is that the intimacy of a home goes further than just the space within your own four walls. As the Dutch expression goes ‘A good neighbour is worth more than a distant friend’. If your neighbours are never the same from one week to the next, short-stay rentals on the scale we see today seriously challenge the concept of a ‘neighbourhood’.

The ideology of Airbnb resonates well in Amsterdam, while at the same time the neighbourhood where we live in is in many cases an intimate choice. We should ask ourselves whether the moment has come to question this investment ideology, not only because Airbnb provides a platform for unlicensed, unregulated, and untaxed hotels, but because our neighbourhood is an intimate place where people live.

It certainly has the makings of a good debate, and for the time being my mother will go on having a new neighbour every week.

I came here because the author used (a badly cropped version of my elaborate visualisation of ghost inhabitants (spookbewoners) see link on this page for the original). Last year I posted my first comment on the phenomenon 'Airbnb verhuur je gastvrijheid en ga er van op vakantie: "nice ideas end up in greed"' - https://flic.kr/p/nSx2Db - which touches on how the internet based matching service facility is an all invading force into our social structures. It redefines what was once 'local' as something I best can call 'faked-global' (what is proposed as global is only for and by those who are affluent enough to experience it). This economic invasion into social fabric of our city neighbourhoods is just a beginning, it will have more negative than positive effects. Terms like 'gentrification' (introduced in urban studies by Jane Jacobs 'The Death and Life of Great American Cities' (1961) are by now obsolete, because the movement of an upper class into what once before a lower class neighbourhood, has become more complex and dynamic with Airbnb and the like. Economic effects (economic cleansing = being forced out because price rise effects) are of course the most dramatic. Before that happens there is a overture of the rattling wheels of suitcases dragged over the pavement of all those flown in on the cheap just for a few days. These ghost-inhabitant facilitated by Airbnb do not enter into a stable house-market situation. They arrive in times of wholesale massacre of what once was the famed Dutch 'social housing' system. Housing associations are selling off great parts of their social houses, thus privatising what was before semi-public. This has been forced by long term national policy changes by a broad front of parties: social-democrats (PvdA), middle class christians (CDA) and free-market-liberals (D66, VVD). This means that in cases where local municipalities try to forbid or limit the renting of 'social housing' via Airbnb, this limitation will soon be lifted as former social housing dwellings will be privatised and 'free market'. Of course 'free market' is just for those who have the financial means, because at the same time - those who want to find a low-cost house will have an even harder time finding one. Formally that was once 'enemy of state number one', de 'woningnood' (housing shortage), has been declared as 'over'. It is in such economic circumstances that any further 'anthropological observation' should be placed.
I may give here a personal example of me as a long term inhabitant of the inner town of Amsterdam in a time where the Disneyfication of the town has reached a high as never before. A typical inner town narrow street of Amsterdam often has houses placed under an angle with the street line with a non-rectangular ground plan, which results into greater visible contacts between neighbours across the street. Many Dutch people do not have curtains in some of their windows, or keep them wide open. Standing directly at the window and looking straight across into the house of a neighbour, is something 'not done'. There is a subtle idiosyncratic pattern of behaviour whereby visibility and privacy are constructed though a dynamic inter-personal choreography. One notices the other close by or in the window, which makes one shy away a bit from direct eye contact, one may adapt instantly, as to see means also to be seen and where you do not want to be gazed at in the full, the neighbour across may think likewise. These processes may very much internalised and hardly conscious acts.
Now Airbnb confronts me/us with a harsh break of all such territorial choreography. I live on a corner house, so the effect for me is even stronger. What was before - especially in the evenings - a familiar landscape of lit windows and movements I see now and then from the corner of my eyes (giving me a safe and pleasant feeling of being part of a community, without hardly ever speaking with any of my neighbours, as this inner town with it's own unspoken rules), part of that is now disrupted frequently and it feels as something dear has been stolen from me.
I do not even speak about the additional option of parties, barbecues, loud music and the like emanating from Airbnb apartments, with no learning curve after complains, because it will be new people all the time. It is me to prove to the authorities that a certain apartment exploiter fails to control his guests.
Last let me add that in many inner town streets this effect is amplified by the exploitation of terraces, with less and less control over the behaviour of those who see the inner town as a place for partying in public space, with opening time ranges from 10 in the morning till mid-night.
What I describe here is something which many of "us" have been exporting to other areas of the world, all those 'tourist paradises' that turn into a small hell for those living there, or those that have been expelledbecause of it.

Dear all,
Mihai and Zane, thank you for your kind words.
Aletta, thank you for sharing the link on Japan. Very interesting to see the Airbnb figures in that region.
And Cees, thank you for your comment. Economic anthropology is about examining the legitimacy of economic ideologies and practices, the dynamics of inequality and solidarity, people’s dependencies on markets, redistribution, and gifts, as well as the connection between democracy and economic regimes. Although I agree with you that my mother won’t see the Airbnb neighbours disappear anytime soon, it is interesting to see how the concept of Airbnb has its influence on a neighbourhood.
Kind regards,
Nikkie

I can see that the author's mother has to get used to weekly new neighbours, although I would hope that as long as they behave that keeps her interested and aware. What I do not see is what this story has to do with Leiden social anthropology.

Great point Nikkie! Very much enjoyed your post and love the insideairbnb project, thanks for pointing that out!

Ha, well, learned something new today and great ideas shared. Definitely a good debate! Can't decide the side I'd see myself defending :)