Data management and ethics: A discussion between two Leiden anthropologists

Anthropologists have important insights to add to the public debate about data management. Come join the discussion on our institute’s position paper on October 26th. Here we share some thoughts on ethics, ethnography, and data.

Henrike: Zane, I was wondering why you volunteered for the Data Management and Ethics Committee of our Institute here in Leiden. I know that for me a major reason was curiosity, as I grew up academically in the US, where there is a strong infrastructure of IRBs (Institutional Review Boards) that oversee all forms of research dealing with human beings. I have become accustomed to the set of questions on IRB forms that ask where I will store my data, who will have access to them, and what I plan to do with the data at the end of the research project in which they were collected. So I was curious to know how this issue is approached in Dutch academia.

I was also excited, because some of our Leiden colleagues are well known for their attempts to approach ethics in less formal and prescriptive ways than is common with IRBs. Zane, what was your reason for joining the committee? I wonder, were you particularly interested because you work so much with digital data?

Zane: As a young researcher I definitely wanted to be part of the discussion about the ways in which we streamline the storage and sharing of data now and in the future. Various institutions, including funding bodies such as the European Research Council (ERC) and academic institutions such as Leiden University increasingly require researchers to implement ‘Data Management Plans’. This means that I need to be aware of various strategies for preserving and sharing research data, as these will be an integral of my career as an anthropologist.

Being part of the committee allowed me to explore the variety of ways in which the issue and ehtics of data storage are approached in different fields. So, for example, as part of the committee, I looked at the guidelines on ethical decisionmaking proposed by the Association of Internet Researchers. I really appreciated the fact that the guidelines emphasized that the data collected from the internet should always be viewed in relation to the internet ‘venues’ (such as news websites or blogs, or social networking sites) they were collected from. I understand this to mean we shouldn't approach all data as equally ‘private’ or equally ‘public’ we need to tread carefully in making ethical decisions of how to treat data. Remind me which ethical codes you reviewed, Henrike? 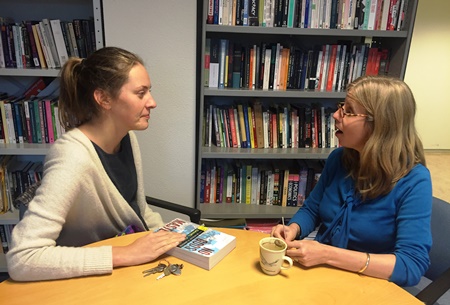 Henrike: I looked at “The Netherlands Code of Conduct for Academic Practice” which was last revised by the Association of Universities in the Netherlands (VSNU) in 2014. For me, one of the key points about this code was its attention to the importance of context and changing circumstances, and the idea that as a scholar you can sometimes have good reasons not to apply the stated ethical principles. I like to call this the requirement to “apply or justify,” meaning that yes, often you will want to implement the best practices expressed in the code of conduct, but that you also have the freedom to justify why doing so would not be the most ethical thing to do in specific circumstances.

Zane: Having that flexibility is extremely important. Data management is not something that can be isolated from the process of doing research and being a researcher with all the ethical conundrums that can entail. My fieldwork experiences made that absolutely clear to me, for example when the people I worked with—aspiring entrepreneurs in Singapore —joked about how my field notes could potentially be used in the future to blackmail them when they would hopefully have become rich and famous. They were worried about me retaining indefinitely information that might potentially be compromising to them. So that really brought home to me that I need to make decisions on what to do with my data.

Data is co-produced and co-owned

Henrike: I'm glad you've brought up the point of how data are created in the fieldwork relationship. In fact, this was a key issue we as a committee kept coming back to. We quickly realized we needed to conside the fact that data are co-created by the researcher and the people she works with. Wouldn’t you say that the idea of the co-production of data is the guiding theme in the position paper?

Zane: Yes, I absolutely agree! It might be good to talk a bit more about this issue, because it may sound a bit confusing to say that data are co-produced and co-owned. What does that really mean in practice?

Henrike: Well, data don’t simply appear out of thin air; they're the product of relationships - in our case, with people we encounter during fieldwork and with whom we often stay in contact. I don’t think co-production of data means you have to ask permission every time you use a quote from your field notes, but you do need to remember the roots of your data, the context and the evolving relationships that made up your fieldwork.

Importantly, the insight that data are always co-produced also made us realize that we could and should go beyond the problematic opposition between the 'duty to science' and the 'duty to the people studied.' That’s what's exciting about the position paper: we're not just talking about sharing data with other researchers. We're also talking about finding ways of sharing data with research populations, which is something we could and should do much more.

Zane: You know, I feel this is just one of the many exciting points raised by the position paper. It's been great talking to you, Henrike. I look forward to October 26th when everyone is invited to discuss our position paper on Data Management for Anthropologists and Ethnographers.' Hope to see everyone there!