Keep It Clean Day! Your contribution to a cleaner ocean

It is Keep It Clean Day! The area that really could do with a good cleanup is our ocean and beaches. Large research studies now focus on the ‘plastic soup’, and local initiatives are equally encouraging. In Dutch we even have a new word: Grondstofjutten.

Plastic Soup and The Ocean Cleanup

In 1997 Charles Moore “discovered” the Great Pacific Garbage Patch in the middle of the Pacific Ocean: large areas in the ocean where plastic pollution is extremely dense compared to other places. The ocean currents cause plastic from land to move to more isolated places in the ocean and to circulate around. The problem of years of littering in the ocean from land became more visible, and the term ‘plastic soup’ was born.

Nowadays, national and international organisations such as the Plastic Soup Foundation and The Ocean Cleanup are doing research on how to remove this plastic from the ocean. The Ocean Cleanup, under the leadership of the young designer Boyan Slat, recently completed a very hopeful expedition about cleaning up the plastic soup. “The Ocean Cleanup's goal is to fuel the world’s fight against oceanic plastic pollution by initiating the largest cleanup in history.”

Where do we begin?

The expedition led to clearer ideas about how the plastic soup could be cleaned up, kindling new hope that it may prove possible to tackle the problem of plastic pollution in the ocean. Unfortunately this doesn’t eradicate the root cause of the problem. The plastic in the oceans originates on land: 8 million tons of plastic enter the ocean each year. In an interview with National Geographic, Slat was asked whether cleaning up the ocean wasn’t like trying to dry out a flooded room without turning off the tap. Slat answered: “It isn’t, the tap should close. There should be less plastic in the ocean.” In other words, extraction and interception of the waste is good work, but prevention would be even better.

In the Netherlands there are many positive and creative developments with regard to litter and cleaning up the environment, encouraging local people to do whatever is within their range. There are the annual Beach Clean Up Tours, for instance, in which volunteers work together in groups to clean up the Dutch dunes and beaches. In August 2015 over 2000 volunteers collected 11,555kg of litter from the Dutch shore. 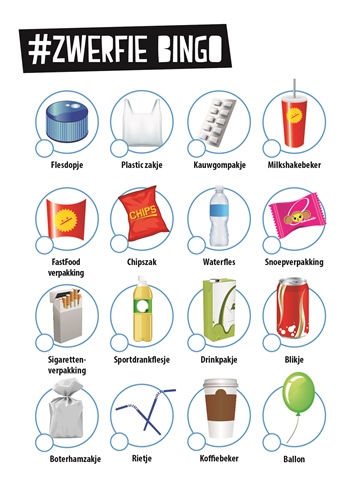 Other very creative and positive initiatives have come from Stichting Klean, whose slogan is ‘I don’t get annoyed about litter, I clean it up!’. One way they have tried to emphasize the positive side of cleaning up litter is by coining the term zwerfie – a combination of selfie and zwerfafval, a Dutch word for litter. This initiative encourages people to collect one piece of litter a day and post a photo of it on social media, at #zwerfie. For children Stichting Klean has invented the brightly coloured Zwerfie Bingo, a game where you collect the different types of litter on your Bingo card.

Besides making it more attractive to clean up, Stichting Klean are now also collecting litter to create a piece of art. Artist Peter Smith is planning to turn 100,000 donated plastic bottles into a plastic Madonna sculpture to raise awareness of the plastic soup problem. In this case the word litter no longer fits: it might be better to speak of resources. ‘Litter’ becomes material for creating something new.

Since June, I am involved in a new Dutch initiative in the environmental cleanup scene: Grondstofjutters. The word 'grondstofjutter' is a combination of 'grondstof' (raw material, resources) and 'jutter', which roughly translates as beachcomber. This organization is now starting up its first campaign in Katwijk and tries to encourage people who are going for a walk on the beach or in the dunes to collect resources (former litter) as they go along, providing them with a special bag, the Juttas.

After their walk the grondstofjutter can separate the litter in special bins. The rubbish in the bins is used to create new items: t-shirts made from old fishing nets, for instance, or new products for using on the beach, created from collected plastic by students from Innovatielab of the Amsterdam University of Applied Sciences. The Grondstofjutter is rewarded with a hot cup of coffee or a nice piece of cake at one of the beach cafés that are partners of the project. This collaboration between local businesses, local government, and people going for a walk on the beach creates a circular stream of resources. 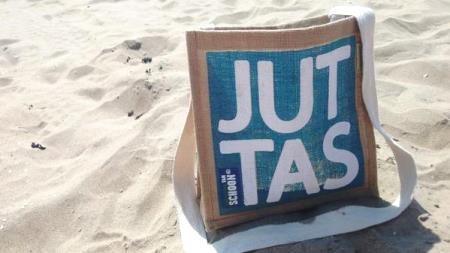 The Juttas in which Grondstofjutters can collect the litter they find along their walk on the beach of Katwijk. Photo by Sean van der Steen

Who’s responsibility is it?

Grondstofjutters is one of the Dutch initiatives that wants to inspire awareness and encourages a change of mindset. A lot of people take care of garbage left on the beach, but this not a standard routine for everyone. Therefore, the organisation approaches local government, business and the people enjoying the beach of Katwijk to get engaged in the idea of a circular beach, where everyone adds to the prospect of litter turned into new interesting products (and with free coffee or cake as a bonus).

Extraction of subterranean wealth is a hot issue in the Netherlands, and elsewhere. How do we anthropologists contribute to the field of research and the public debate on mineral and gas extraction?

Sustainability bottlenecks, paradoxes or myths are addressed by many researchers in the broad field of sustainability. Yet, few authors come up with a clear framework for sustainable solutions. Here, some valuable directions from my teaching practice.