Professor in Anthropology of Africa

The anthropology of material culture teaches us what things can do to people. But do we understand the cultural effects of a hysterical object like the Dutch monarchy’s Golden Carriage?

Recently it once more paraded the streets of The Hague on Prinsjesdag, 'our' Golden Carriage. This is not your everyday means of transport: it is used only once a year on the third Tuesday in September, when it brings King Willem-Alexander and Queen Máxima to the throne to read out the Government’s annual plans. When not in use, it is treated with the utmost circumspection: it must not be touched without a reason and is dusted only rarely, because the layers of plate gold that cover it are delicate and vulnerable. The custodians of the Golden Carriage tiptoe around it like psychiatrists around a patient with a nervous breakdown.

I think the Golden Carriage requires us to think up a new class of material culture all its own: hysterical heritage. This is not your ordinary, robust thing – like the tools, stools and sofas we live by and on which we rely for survival and relaxation – things we forget precisely because they are essential parts of everyday activity. Nor can it be classed with the commodities we choose to consume every day – not even those special treats we sometimes persuade ourselves we deserve (despite the fact that they are usually too fattening, too sugary, or too alcoholic). It is even out of the league of our commodity fetishes – the fashions and gadgets we think we cannot afford to miss, only realizing how obsessive our cravings are when we discover we are not cool, or we cannot get online. 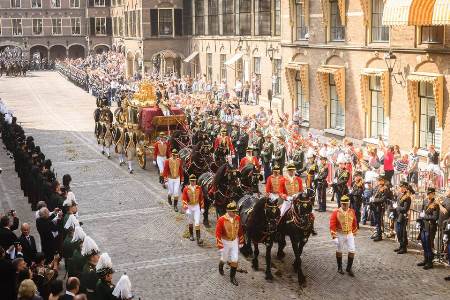 The Golden Carriage at the Binnenhof in 2014. Photo Rijksoverheid.nl.

Finally, hysterical heritage is not even in the same class as the admiration we fake or experience in front of a work of art or a sublime masterpiece, or even the shivers we get from the mummies of Egypt or the waxen simulacra of Madame Tussaud’s – for even when objects provoke horror or awe, these sentiments are relatively simplistic when compared to our response to hysterical heritage. The Golden Carriage is a hysterical object, because the exalted atmosphere from which it emerged and that it should generate in turn was never collectively shared and always disputed, and because the object’s over-the-top appearance continues to remind spectators of similar disputes and deliria.

When the Carriage was first offered as a present to the young Princess Wilhelmina in 1896, to be used on her coronation day, it met with a lukewarm response. This was the heyday of the invention of the monarchy as a modern tradition, yet Wilhelmina feared the sumptuous gift might associate her with Tsar Nicholas II and the luxury her Russian relative so contemptuously displayed in the face of grinding poverty. (And we know the nasty end that the Bolsheviks had in store for cousin Nicholas twenty years later.)

Wilhelmina accepted the gift nevertheless, swayed, some socialists claimed, by the sentimental whining of the Amsterdam merchants on her inauguration committee. (It seems no coincidence that the committee was chaired by Herman van Eeghen, who also had an interest in the firm that would build the Carriage. Such corrupt interests remind me of current Dutch merchants wanting to make a profit from another famous piece of Dutch hysterical heritage; Zwarte Piet ("Black Pete").) 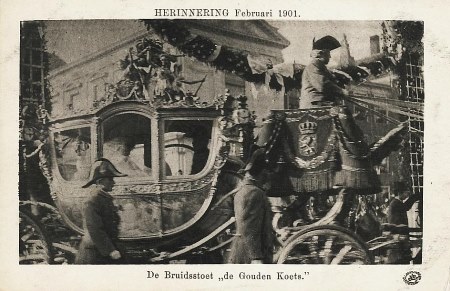 A postcard of Golden Carriage at Queen Wilhelmina's bridal procession in 1901. Photo from Geheugenvannederland.nl.

Restricting the visibility of 'Dutch' heritage

Popular support for the Carriage was also maniacal: the idea emerged from a staunchly monarchist neighborhood of the Jordaan, where the loan-shark Jacob Mens and his sons had pulled the King’s carriage ever since they renamed their street after the King (and made war on nearby socialists whenever appropriate). Even the building of the Golden Carriage was hysterically nationalistic: when the claim that it was entirely “made in Holland” turned out to be tainted by the contribution of a Belgian carpenter, his work was immediately hacked out of the Carriage with an axe. The fact that the Amsterdam Orangists had set out to copy and even outdo the hyperbolical Orientalism of carriages built for the colonial rajas of Solo and Djokja, and had to use Javanese teak and Sumatran ivory for its construction, apparently did not make the venture any the less nationalistic, but certainly not less deliriously jingoistic.

Wilhelmina accepted the Amsterdam Orangists’ neurotic gift, but (to appease the socialists) rode in it neither on her coronation day in 1898, nor afterwards, until her marriage in 1901. From then on, she restricted its use to Prinsjesdag. She even tried to tuck its crazy wealth away in the Rijksmuseum, but without success. Since then, on the rare occasions when this piece of ‘Dutch’ heritage has been publicly visible, it has continued to provoke frenzied reactions: a smoke-bomb thrown during the marriage of Beatrix and Claus in 1966, white paint when then prince Willem-Alexander married Máxima in 2002, a tealight accompanied by abuse (“Nazis!”) in 2010. 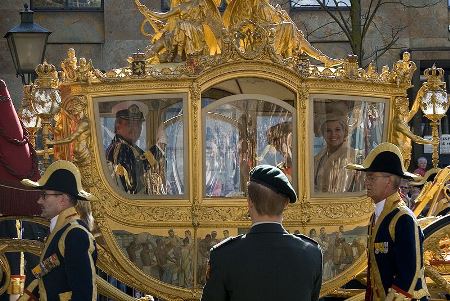 King Willem-Alexander and Queen Máxima in the Golden Carriage in 2014. Shown on this side is the panel with the colonised peoples presenting gifts. Photo Rijksoverheid.nl.

Now that the Golden Carriage needs to be restored (immobilizing it for the next three or four years), the question has been raised whether the racist pictures of colonised peoples on the side panels of the Carriage should not be erased. This demand is itself neurotic: denying the unpleasant part of one’s heritage is similar to denying one’s personal past mistakes, and will increase trauma rather than appeasing it. Instead, we should try to have the Golden Carriage realise the true potential of heritage: not to show us who ‘we’ are, but to remind us of what we would like to avoid in the future.

To achieve that, we should follow Wilhelmina’s original inclination: we should place it in the Rijksmuseum, where the Golden Carriage will cease to provoke political hysteria and be consigned to a more appropriate object category: kitsch.

Thanks for your article, it contains some new facts for me! Last month I was one of the people who protested on the Museumplein against the racist picture on the Golden Carriage. So I just wanted to add to you article that after the letter from the Landelijk Platform Slavernijverleden a few years ago there has been more protest last month. We also advocated putting the Carriage in a museum: http://www.joop.nl/opinies/detail/artikel/33398_de_gouden_koets_hoort_in_het_museum/