Various visual anthropologists work in healthcare. Why is that? I found out when I started following my brother with a camera, the moment he was diagnosed with autism at age 42.

Over the past year I have often been invited to show my film Get it?! to a variety of people, varying from health professionals to general audiences to policemen, civil servants, and people labeled autists and their families. Each niche audience had specific questions, yet all of them wanted to know why on earth I had filmed my brother Jan-Willem and how he felt about that.

It is only in hindsight that I can begin to think about an answer. In the beginning there was no ‘why’, I just did and he went along – often grudgingly telling me what and when to film and what not. I had simply grabbed the camera when a new phenomenon, autism, entered our life. Was it my professional bias? I wanted to find out what ‘autism’ means in my brothers life, how and where it surfaces, how it influences interactions, and to what extent such a diagnosis - at age 42 – could shed a different light on our family history. 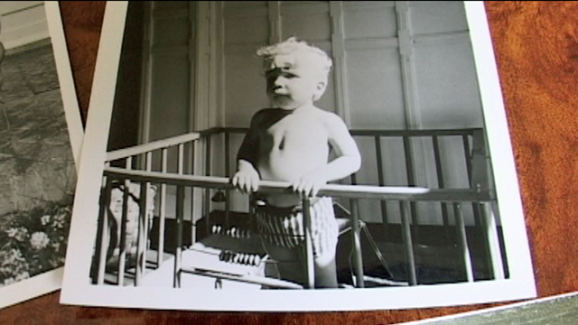 At the end of that journey I now wonder to what extent my brother has made me into an anthropologist to begin with. After all, in a sense I grew up with an ‘other’ at home, unknowingly being trained in fieldwork skills and attitude. Our communication was full of trying to understand someone else’s logic -- someone who has no clue where you are coming from.

It is only now that I consciously apply a kind of fieldwork attitude in communicating with my brother, as that seems to work best. In the film it shows, for instance, during the final scene - in which Jan-Willem struggles with his computer. He is overwhelmed by options most of us have learned to master. I try to take him a step at a time through the task at hand: sending an email.

Despite his above-average intelligence he does not (yet) manage to do this. In our interaction I aim to elicit his confusion. I catch an explicit glimpse of his daily panic about an incomprehensible universe, a world most of us inhabit on auto-pilot. This time it is just a machine instead of peopIe behaving incomprehensibly. So I stop in my tracks, and realize I cannot take anything for granted. I watch, listen, and probe with open questions in a non-judgmental manner and tone. That makes him feel safe enough to continue a bit further. 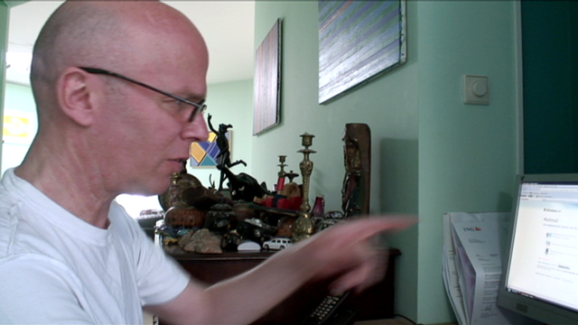 So when people ask me how to deal with my brother, or ‘autists’ in general, I’m inclined to say: become a fieldworking anthropologist. It may take patience but it is very rewarding, too, as people with forms of what is called autism often make us aware of our own implicit social conventions. Autism as a medicine against ethnocentricity?

I deliberately say ‘so-called autism’, because definitions tend to change in each consecutive DSM and it remains debatable what gets defined as disorder or disease in itself. From the point of view of anthropologists little is truly universal, and that includes ‘dis’order and ‘dis’ease. Whose order? Whose ease?

That does not mean there are no patterns to be found in the logic and behavior of people that fit an autism spectrum (dis)order. However, just as the phenomenon of culture or ethnicity it cannot be generalised or objectified. Patterns vary, with each individual and each specific situation provoking different unpredictable reactions, and most often confusion.

In a way an autist must feel like a lone anthropologist entering a completely new field, not understanding much of what is going on; entering a society full of secret rules and conventions that you need to learn one by one. And life is full of rituals that give you the feeling you have to pass an exam: how do I behave ‘properly’?

An example: in the film my brother gives a house warming party. He usually does not celebrate things but this time he has been coerced by a friend into adapting. In the Netherlands it can be customary to bring a plant as a present for the new house. Jan-Willem is not aware of this habit, however, and does not know what to do with this new phenomenon. He stops in his tracks, frozen with plant in hand, until someone relieves him of it. 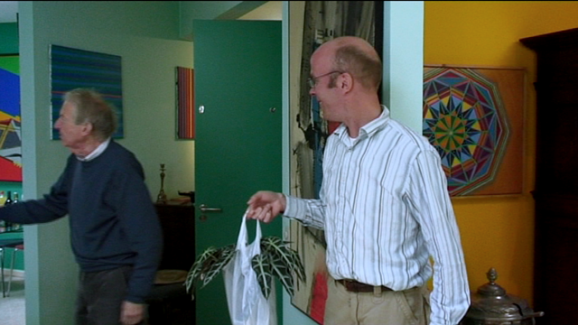 The question is: who needs to adapt or adjust to whom? Can we dwell in the statistical power of a majority and remain passive, expecting others to assimilate to our normative rules? Or should we strive for mutual integration with ‘others’, be they ‘mentally challenged’, ‘ethnic minorities’, ‘handicapped’, or whatever?

While I was recording, various healthcare professionals requested I’d compile a film for instruction purposes. They needed a filmic case study that would help recognize certain characteristics in behavior and (mis)communication. The phenomenon of autism is hard to grasp, partly because it is so varied in its appearances. Visual material of daily life situations can be extremely helpful, so I was told.

I acceded to the request. Literature research and more educated earlier observations ensured I had the camera running during moments of a certain significance. The lenghts of shots and scenes as well as the framing were led by my brother through the behavior to be recorded. Then, editing took place in collaboration with both my brother and mental health professionals.

This observational mode in film making has little to do with cinematic language as such (see my previous blog), but all the more with using the camera as an intelligent recording machine, guided by participant observation. A well-chosen slice of time, space, and action gets frozen, canned, and made ready for communication elsewhere. This approach can lead to this kind of comment I received:

‘The lengthy silences that for Jan-Willem are filled with confusion have been beautifully recorded. (...) Those who watch Jan-Willem closely and try to put themselves in his place can learn a lot about autism.’ (my translation)

In other words: film can truthfully help us to understand ‘others’, if recordings are carefully selected. Film can serve as a method to familiarise us with the unfamiliar.

PS: Those who want to see the healthcare film and/or the extras - showing my brother as artist rather than an autist - need this password: stichtingdocuprins