It is charcoal, but not as we know it! - Professor David Miller has a mission to decrease the brain drain in Ghana. By making charcoals out of grass he found a great alternative that could benefit employment as well as sustainability development.

“We call it biochar,” Professor David Millar explains enthusiastically to the delegation of civil servants visiting him at his office. During my visit to our Field School in Ghana, I am invited by our local partner Professor Millar to a product presentation on his new mission. He explains the principle: the dried grass is heated without it catching fire – a process called “charring”, then bound with clay or starch, and finally pressed into a mould.

“We’re still at the experimental stage,” Millar says, “but the initial results are very promising. Biochar doesn’t smell and doesn’t produce smoke, but we have to improve its consistency and increase its burning life. If this works, it’ll create a grass economy for the north: people will stop burning the bush – bushfires – because they can sell grass to the factories that produce the grass briquettes; and they will also stop cutting trees for charcoal."

"A lot of damage to fruit-bearing trees is done by people making charcoal from wood," he explains. The charcoal industry can be quite a problem, especially for the women who collect shea nuts in the bush for the production of shea butter. And when grass is reaped or cut, new grass finds it easier to grow, thus providing food for the livestock that wander around everywhere in search of food. This will be our small contribution to climate change and the bigger issue of saving the planet.” 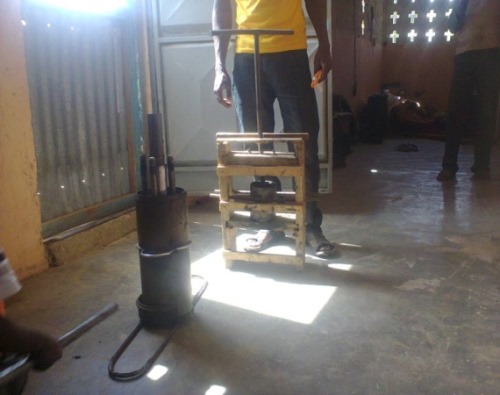 The old moulding machine on the left; right the new improved one (with car jack to press the charcoal into desired shapes and sizes), made of recycled material. Fabrication cost: 75 euro.

The four civil servants are sceptical. They tell Millar it’s all too good to be true; Ghanaians won’t easily change their attitudes, they argue. And they object that the product needs a subsidy to launch it among Ghanaians. Then Millar’s MPhil-student, Tunde intervenes: “At that stage of the project you can involve the many unemployed young people with a higher education degree. They are the perfect group to organise the introduction of biochar and the education process. And the unemployed girls popularly called 'kayaye' in Ghana will be able to earn a direct income, selling this charcoal door-to-door or to institutions.”

“Maybe there’s an easy way for Ghanaians to earn the subsidy themselves,” I suggest. “Just put some biochar in a small bag with a label Fair Trade Bio-Barbecue, send it to Holland, and hip urban people will buy it at five euro a bag and feel good about using it for their weekend barbecues. Anthropologists call it ‘eco-chic behaviour’. That’s how you can earn the subsidy.” The civil servants gaze at me, Millar has a twinkle in his eyes. (And I think: “What would my colleagues think about this?”) 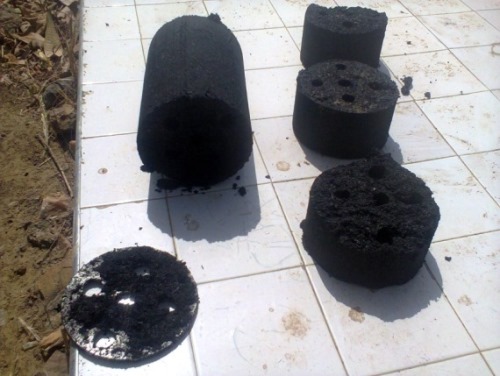 The finished product; biochar out of grass.

Professor Millar holds a PhD from Wageningen Agricultural University. He chose not to pursue his career in the Netherlands, but returned to Ghana, where he accepted a chair at the University for Development Studies in Tamale. Tamale is in the poor Northern Region of Ghana, which has a dry and hot savannah climate. Millar is himself from the north of Ghana. After his retirement he didn’t opt for a life of leisure in a villa in the rich(er) south, but instead invested his private funds in developing a university.

This university was created in Bolgatanga, one of Ghana’s poorest regions, in the Upper East Region of Ghana to the north of Tamale, close to the border with Burkina Faso. It is called Millar Open University (“open” means that it offers both integrated programmes and individual courses), and it consists of lecture rooms, offices, dormitories, and study rooms. MOU has the aim of stopping the brain drain to the south. In Ghana David Millar’s initiative is widely recognised and much respected. In 2015 the President of Ghana, President John Dramani Mahama, appointed him as Commissioner to the National Development Planning Commission of Ghana, the highest planning body in the country.

Millar has a network of Dutch friends in African Studies, so they put me in touch with him when our Institute was searching for an academic partner for our Ghana Field School. The first steps are promising, not least thanks to the great hospitality the visitors from Leiden enjoy each year at MOU, which offers them the use of students’ dormitories, study rooms, and even some office space. When I met Millar, I soon discovered he is no day-dreamer and immediately gets down to business. His conversation is as to the point as his e-mails. “You are extremely efficient,” I once remarked after another quick encounter. “That’s a bad habit I picked up in the Netherlands,” Millar replied with a grin.

In David Millar’s office I felt the heat of scholars committed to achieving something for their own people. The temperature in Bolgatanga that day was 39 degrees Celsius, in the shade. Millar and Tunde didn’t seem to feel the heat – they had a mission to accomplish!

Another good-news story.
What has this article to do with Leiden Anthropology?
It refers to one of thousands of well-meant agricultural/energy experiments which are still in the phase of technical conception and development. Application, acceptability, ownership etc. are a long way ahead. Most of these experiments remain in the dream- and wishful thinking phase if the end-users have not been participants in the experiment right from the beginning.
In my opinion this text rather belongs to the magazine Spore of CTA in Wageningen, which announces this sort of initiatives without pretending anything in the field of science, let alone anthropology. Or in the popular Dutch NGO or NCDO magazines.
If Leiden Anthropology ventures into the field of agricultural/energy extension, then higher demands should be put on treating the social or anthropological side of the matter. Such superficial journalism should not figure on the front page of this blog. Moreover, the message is not clear: what does the author want to convey to the public? What is the (good) news?