A Show of Horses and Men

A man rides a white horse against a bright blue sky. The image evokes a sense of heroism, of freedom. Unlike the stereotypical prince charming or cowboy, however, this man’s dark skin contrasts with the whiteness of his horse. In the background, there is no endless wild western landscape, but the fences of suburban Philadelphia.

The photograph is part of Horseday, a project by French-Algerian contemporary artist Mohamed Bourouissa. It has recently been acquired by the Stedelijk Museum in Amsterdam, together with a two-channel video. Until January, the photograph and the accompanying video are presented as part of an installation designed by the artist. 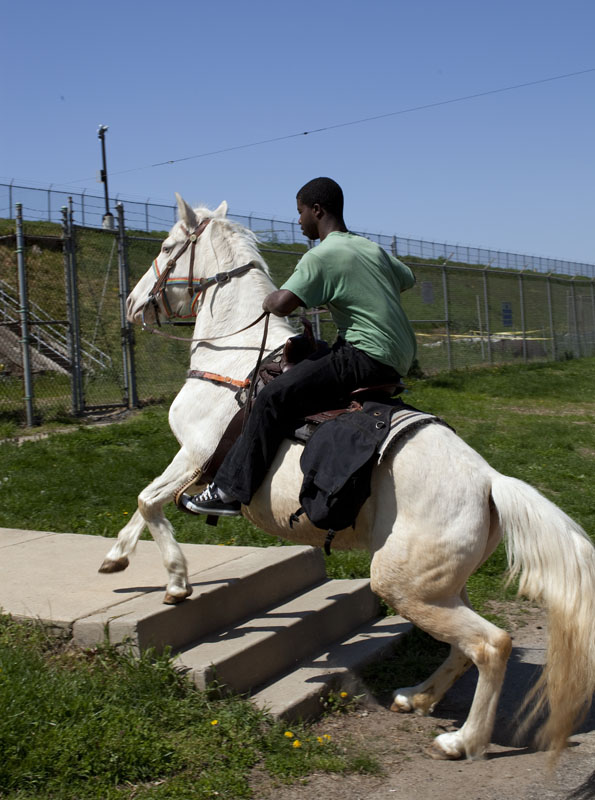 Through the presentation of text, photographs, used objects, film, and sculptures, Bourouissa introduces the audience to an African American community in Philadelphia, where men take pride in their horses and riding skills. Bourouissa organized a ‘horse-tuning show’ with them: instead of pimping up their cars, the men competed for the most beautifully decorated horse.

People at the margins

As with the image of the ‘cowboy’, the artist evokes an American stereotype with the tuning show and simultaneously reverses it. He seems to deliberately avoid the pitfall of reinforcing old imagery that famous Indian scholar Gayatri Chakravorty Spivak warns against in her 1988 article ‘Can the Subaltern Speak?’ However, does this allow the ‘subaltern’ – those who live in the margins of the capitalist world system – to speak and be heard?

Can the artist be neutral?

The Horseday exhibition starts off with an introductory text that presents Bourouissa as an ‘in-between’ figure: he has no explicit position and is both a ‘neutral observer’ and an ‘involved participant’. These statements evoke the sense that the artist is a trustworthy authority on this particular community, but also leave the reader dissatisfied.

To present Bourouissa as a ‘neutral’ observer and involved participant ‘working in and with the community,’ Bourouissa’s presence is uncomplicated and frictionless, denying the artist as a person with his own views and interests. The audience knows that the artist initiated the horse-tuning show, but remains in the dark about his role in the process and his relationship with the horse riders. As a result, it is hard to tell whose voice is represented in this exhibition, and why. 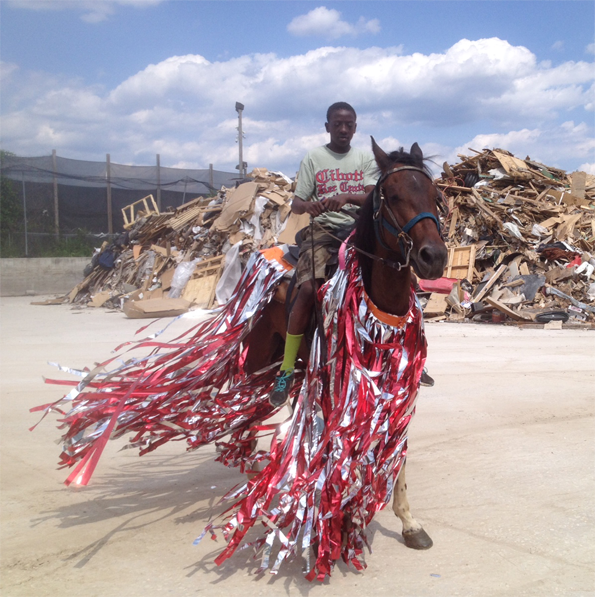 Between show and reality

Horseday is built around the two-screen video-installation. It is shown in a space with eight walls, so that the two screens point towards each other. In the middle of the room there is one couch, and audio is provided by car speakers. The left screen shows images of the horse-tuning event, while the right screen shows preparations: the men discuss their horses’ decorations with local artists, put up posters, and express their expectations of the show.

The introductory text states that Bourouissa is known for his staged images, and makes a distinction between ‘everyday scenes’ and the ‘staged event’ in the video. This distinction is not as clear as the Stedelijk Museum suggests, however. Towards the end of the film, the video’s style changes from documentary to western or music video. On the left screen, the riders show off their skills in slow motion, while on the right screen we see a race between a car and a horse and rider.

These last images make the viewer wonder about their artificiality and, in retrospect, about that of the rest of the video. While ‘everyday scenes’ have been instigated by the artist’s interference and sometimes seem directed, the ‘staged event’ of the tuning show has a ‘real’ quality to it.

The meaning of reality

To reach the room in which the film is shown, visitors cross a hall of which one wall is covered with posters and horse decorations from the tuning show. These objects place the filmed event in a tactile, objects-producing reality. The audience is then left thinking about the meaning of reality, authenticity and staging.

Horseday does not provide much context and creates confusion about the staged and/or real quality of the images shown. However, visitors to the Stedelijk Museum are likely to have been trained to deal with multi-interpretational and open-ended contemporary art; they speak its language. 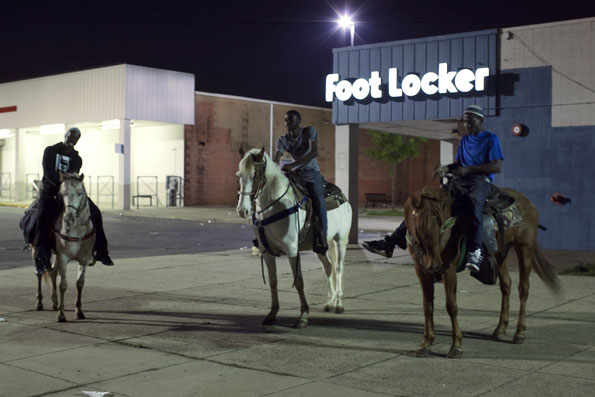 The silence of the horse riders

They will have a harder time understanding the speech of the Afro-American equestrians than that of Bourouissa or the (light-skinned) artists who appear in his video. Spivak has argued in her 1988 article that as long as ‘white men’ talk about the other among themselves, in their own language and often for their own benefit, the other’s voice is silenced. It is questionable, however, whether letting his subjects speak was Bourouissa’s goal in the first place.

In the video-installation room, the two-sidedness of the presentation and the low volume of the car speakers, in addition to the dialect of the horse riders, make it very difficult for the audience to understand what is being said. This audio problem could have been solved through subtitles, but the artist chose not to do this. Does he want to confuse the audience? And if so, for what purpose?

It could be that Bourouissa means to direct attention away from the individual horse riders to what he feels they represent. This idea is reinforced by the lack of information about these men, and by the art pieces made by Bourouissa, for which he projected images of men on aluminum objects, old car parts, and horse riding equipment. ‘

‘Visitors’ perception of the horse riders is therefore framed and distorted by the symbols of status, masculinity, and American culture on which they are projected. Visitors do not get to know the horse riders; they get to see them as part of a show, part of the artist’s play on the symbolism surrounding men, cars, and horses.

Therefore, although the subaltern does not speak in Horseday, Bourouissa makes no claim to represent an ‘authentic’ voice either (Spivak 1988, 90). The emphasis on perception, and the constant confusion about what is said, what is meant, and what is real or not, ensures that the ‘white men’ in the audience are left feeling they have not properly heard the Afro-American cowboys and become curious for their voice.

The exhibition ‘Horseday’ runs from September 10th 2016 until January 8th 2017 in the Stedelijk Museum Amsterdam.

I always prefer to read magazines, blogs on my free time. This blog is on of my favorite. I got a well maintained structure in every article. You have a good skill in writing. Keep writing more and share it with us to get more knowledge. Thank you.