The problem of ‘culture’ in the New Economy

Governments around the world postulate digital entrepreneurship as the key to their nations’ economic future. Yet it seems that this call for more entrepreneurial citizens also goes hand in hand with a request to change culture.

Entrepreneurship as the way in to the future

'At the time of economic gloom, I’m in no doubt where our hope lies - with startups, innovators and entrepreneurs' This is how Neelie Kroes, the European Commissioner for Digital Agenda, welcomed roughly 1,500 participants at a recent digital industry conference Next 13 in Berlin through a video message. The Next 13 annual conference is described as the number one meeting place for the European digital industry where, according to the website, marketing decision makers, business developers, technical experts, and creative minds come together “to discuss what will be important in the next 12 months”. The two-day event, as I gather from the videos and the program (PDF), was marked by inspirational talks on a range of cutting-edge technologies, speculations about digital trends, discussions on how to create business opportunities based on these technological and social changes, and celebration of the uncertain, disruptive future which will open doors to greater profits.

While it would be easy to dismiss this, or other very similar events, as something futuristic, marginal, speculative, elitist, and on the whole detached from the everyday experiences of most of the world’s population, the unfolding future is created and shaped very much by the ways in which we talk and think about it - especially when these narratives shape the technologies we use on a daily basis and even more when such discussions intersect with political agendas. While Neelie Kroes opened the conference, another influential politician, Peer Steinbrück, who is the Social Democratic Party’s (SPD) candidate for Chancellor of Germany in the 2013 federal elections, gave a keynote presentation on the “Future of digital economy” later in the day. In the same way as Neelie Kroes, his political vision of Germany as the centre of what he called “the 4th industrial revolution” also to a large degree relies on encouraging digital entrepreneurship.

The young, bright and resilient builders of the knowledge economy

The roots of the concept of a knowledge economy (often also referred to as the ‘New Economy’ or ‘digital economy’) go back to the USA in the 1960s, when economists noticed that an increasing part of the economy revolves around services and information processing, rather than manufacturing physical goods or agriculture. In the context of the Cold War and the ideological competition in building a better society, this notion of a knowledge economy quickly attracted a wealth of utopian expectations. Information and communication technologies were associated with increasing productivity, and the ability to process information real-time gave impetus to expectations that markets could now become truly efficient. The neoliberal policies of the 1980s and 1990s were a clear example of how these narratives about a technology-driven economy had entered government policies, and shaped the everyday experiences of people around the world. The birth of the Internet and the World Wide Web in the 1990s and following hype of internet companies during the Dot-Com era of the mid to late 1990s seemed to confirm that, indeed, a radically new economy is on the rise. It is believed that when information and knowledge become the primary resource for economic growth humankind enters a time of economy of abundance, since creativity is not a limited resource, as opposed to the material resources of the past.

At the very heart of these expectations were (and still are) startups - young technology companies typically imagined to be run by university drop-outs - young, bold people motivated and daring to change the world, and willing to put in thousands of working hours for low pay or none at all over multiple years, with expectations of large returns some time in the near future. The massive appeal of technology startups lies in their potential - while they do not require lots of resources to get started (as compared to any industrial enterprise), the rapid high growth and massive scale they can reach seemingly overnight due to the ‘virtual’ nature of their business makes them an attractive case for investment. While startups can succeed spectacularly, they can also fail fairly quickly; the estimate is that 90% of startups fail. 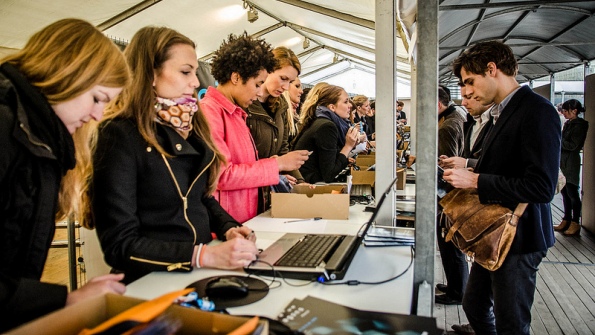 Young visitors of Next Berlin 13 - by Heisenberg Media, Dan Taylor

What really struck me watching the speeches at the Next 13 conference in Berlin by the two politicians mentioned above was how similar the rhetoric about entrepreneurship were to what I encountered in Singapore. The most peculiar, to my mind, is that in this quest for more entrepreneurial citizens culture becomes a major issue - a problem that needs to be overcome through transformation.
In Singapore, risk aversion is often described as an “Asian problem” - a cultural trait that needs to be fixed. Willing to take risks also means opening the space for/door to failure.This, however, is seen as something antithetical to Asiannness and therefore the culture needs to be changed. It is believed that once Singaporeans are willing to let go of their aspirations of secure employment in government or multinationals, the country will have its technology startup success stories. Just as in Singapore “Asianness” and its risk aversion is seen as one of the biggest threats to the success of the new economy, in the speech by Peer Steinbrück “German perfectionism” was also positioned as a problem that needs to be overcome, because it leaves no space for learning by failing and risk taking. And in both cases, Singapore as well as here, the role model for a risk-taking entrepreneurial ethos is the Anglo-Saxon world, or more precisely the United States.

Paradoxically, in the same speech Peer Steinbrück explained that the reason why the German economy is so strong compared to those of the UK or USA is that Germany didn’t take the risk and didn’t get involved in the financial speculations in the years leading up to the 2008 financial crash. The problem of Asianness in Singapore seems similarly paradoxical, since the very same traits that are now being condemned and described as in need of change are the traits which were praised during the 1990s as the explanation for the “Asian miracle”.

Moments like these, when in the name of a better future culture is defined and re-defined are of great interest to anthropologists. When governments and regions strive to ensure their competitive edge in the global knowledge economy, assumptions about the qualities necessary for success have escaped the domains of infrastructure and aim to regulate culture according to an economic rationale.