Vager Saadullah is a journalist and political analyst, living in Duhok - the KRG region in North Iraq. I interviewed him in April about his life experiences in this region and his views on the war with the Islamic State and the future of Kurdistan.

Childhood in a war region

Vager originates from a village in north Iraq, close to the border with Turkey. Until the late 1990s, life in this region was marked by conflict. “One day when we were sitting in class one of the boys was asked by the teacher why he was not paying attention. He replied: ‘You know what I was thinking about? I was thinking: if you lined up twenty-five men and shot one DShK-bullet, how far would the bullet go?’ That was our life.” 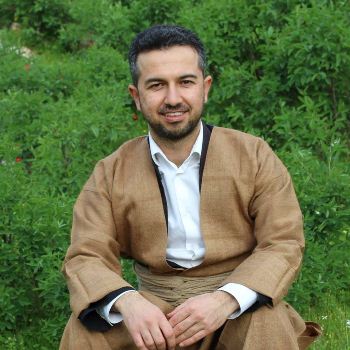 In 1988, when Vager was two years old, his family escaped from their village during the Anfal Campaign and lived for four years in a refugee camp in eastern Turkey: “Many people from our village went to Iran at that time, and many others went to Muş in Turkey”. In 1991 a safe haven was created to protect the millions of refugees fleeing from Iraqi terror. Since then his semi-dependent region is governed by the Kurdistan Regional Government (KRG). A year later Vager and his family moved back to Deralok, a town in their home region.

Deralok was one of the collective towns built by Saddam Hussain in the late 1970s with the aim of emptying the countryside of support for the Peshmerga army (a Kurdish resistance movement in Iraq). People were forcibly evacuated from their villages and settled in towns. Additionally, the village where Vager was born serves as a PKK (Kurdistan Workers Party, Kurdish resistance movement in Turkey) base until today, which makes it impossible for the villagers to return there. “My father and grandfather always talked about our village. How beautiful it was in the mountains. We have a very good life in Duhok, but even now my father still speaks of going back.”

“In conflicts no one is totally right, and no one totally wrong”

The complex and painful history of this region is shown by the many battles fought out on its soil, which continue to ravage the region. Not only was there conflict with the Iraqi regime, but also among Kurdish parties. Most men from this area were enrolled in the Peshmerga, and often people were kidnapped and killed. “We were children and our parents stopped us from going out to the river or playing outside because of the fighting, also during the day. Our houses were built from mud and were not strong enough to protect us against mortars. So we often gathered together in the few stronger houses that we had in the town.” Life was also difficult economically. The Kurds had to contend with two embargos: from the US against Iraq, and from the Iraqi government against the Kurds. People starved.

Between 1998 and 2014, the KRG region slowly recovered from the protracted wars and became one of the most stable regions of Iraq. With a large increase of foreign investment the region was thriving economically as well. Despite problems such as corruption and repression of dissidents, there are many positive developments. However, the surprise attack of IS in August brought this region under fire once again.

“From 2014, when IS came, we again moved towards a militarized society. They were very close to Erbil, and even to Duhok. So many people prepared to fight and bought weapons. And I was thinking of becoming a sniper myself (laughing). It was a very bad situation and people said: we will have to flee to another country again. So I and many other people made the decision at that time that we would never leave this area to IS. We will stay and we will fight.” 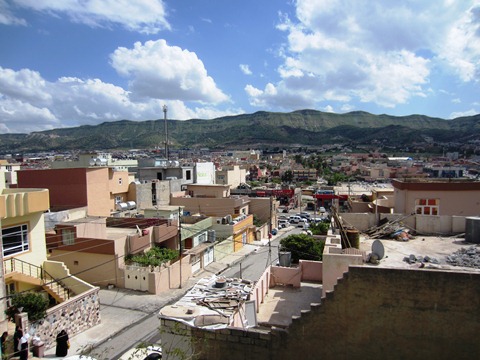 Reporting from the frontlines

Vager’s journalistic career began in 2005, when he wrote some critical pieces about corruption. In our interview he shows himself a critical thinker who is not easily discouraged, in spite of threats and negative responses to his work. He has in-depth knowledge of the broader region and has interviewed political figures and military leaders from Iraq, Syria, Iran, and Turkey. He follows the recent war with IS from inside. “As a journalist and as a fixer for foreign journalists, I have been to many frontlines. When the Mosul dam was first liberated on the 17th of August I was there. And one day after Mount Shengal was liberated I was there. I have published many stories from the frontlines.”

When I asked Vager how this experience was for him he said: “Maybe for people who have not have any experience of shooting and firing or skirmishes between groups it would be a bad experience. But I saw it all in my childhood, so it was not new for me.”

Kurdistan and the future

According to Vager KRG is going in the right direction economically and politically. When IS was close to Erbil, the US provided military support for the Peshmerga to fight IS, whereas they refused Malki’s official request for support for the Iraqi army. "The good thing about this region is that it is not involved in the sectarian war between Sunni and Shia, or in the competition between the Gulf countries or Turkey or Iran. The people here do not take sides; they only care about the Kurdish region."

The fighting with IS continues at the border; there are bomb attacks from time to time; and sometimes Peshmergas and civilians are killed. But Vager thinks it unlikely that IS will manage to enter the Kurdish region, and "even if ISIS came, the people would not accept their mentality, their ideology." He regards the relatively high level of freedom of expression and the acceptance of minorities as a way to safeguard the positive developments in Iraqi Kurdistan, and he hopes that this will also apply to other Kurdish regions. 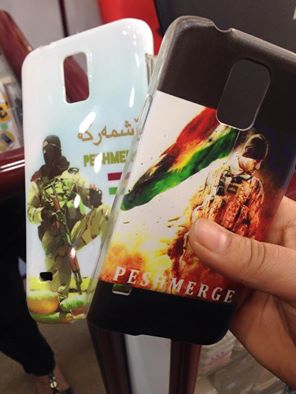 "From 2003 onwards many Sunnis, Christians, and Yezidis from Baghdad and Mosul have come to this region. That's why we can say that this region is a safe haven for different ideologies and religions. This is how we can survive. And after IS came to the region Peshmerga controls almost all Kurdish areas, including Kirkuk (oil rich city), which had been out of KRG control before June 2014. This makes the dream of independence more real than ever." 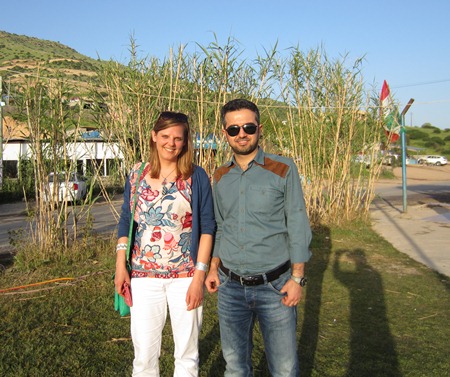 Read Wendelmoet Hamelink's blog on her current visit to Iraq:

Some of Vegar Saadullah’s articles: