According to Airbnb, Amsterdam is the first city to have passed an Airbnb-friendly law. Yet, fed up by room letting websites, the neighbours are less friendly.

Already more than two years ago the Amsterdam court ruled that renting for short stay is a change in the use of the property (commercial exploitation) and is, therefore, illegal unless the homeowners’ association has given permission. In some parts of Amsterdam neighbours are joining forces to use this strong legal tool they as residents have to effectively prohibit short-stay rental. But how does this work out in practice?

At the beginning of 2014 the authorities of Amsterdam stated that, subject to certain conditions, short-stay rental was legal for private homeowners. The reason for the authorities’ tolerance of short stay is not entirely clear, but it may be pragmatic: they do not have the capacity to enforce a prohibition. This so-called Airbnb-friendly law allows people to rent out their homes for short-stay purposes for up to two months per year. However, there are a couple of rules: you have to pay tax, you may only accommodate up to four people at a time, you have to inform your insurance company, and you need to have permission from your landlord, housing association, bank, or homeowners’ association (HOA).

In Amsterdam there are about 15,000 homeowners’ associations. Homeowners in apartment blocks are collectively responsible for the management of the shared areas in the building. These associations also monitor whether the obligations neighbours have towards each other are being kept. The HOA organizes the upkeep of the building, the cleaning of the windows, etc., but also safeguards access to the emergency exits. The legal documents homeowners acquire when buying an apartment include a description of which parts of the building are collectively owned and which parts are private.

They also include a description of the land-use category to which the property belongs: residential use, for instance. And this is the crux. In the case mentioned above, the judge ruled that renting for short stay constitutes a change in the use of the property (commercial exploitation) and is therefore illegal unless the HOA has given permission. Consequently homeowners’ associations find themselves in the position to issue a fine and/or bring a case to court, which can ultimately lead to an eviction.

Power to the HOA

After a couple of complaints about the usual matters – the noise of trolley suitcases in the flat, guests smoking cannabis or leaving their rubbish behind in the corridors, ringing a neighbour’s doorbell late at night (because they had forgotten the right number), etc. – the board of one HOA for a building in the west of Amsterdam decided to take action.

First, they tried to identify which apartment was the problem. The apartment was easy to identify, since there were many statements and observations from the neighbours. These, together with screenshots of the website of Airbnb, provided enough evidence for the HOA to issue an initial warning. After three warnings and a fine, the owner of the apartment stopped renting it out. Of course, this is a rather simplified description of what a HOA does. Even though the complaints of the residents are genuine, I have noticed that people are not necessarily eager to talk about others illegally renting out their homes. The fact that they are neighbours makes it even more problematic. 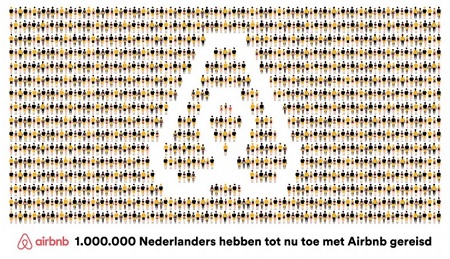 The sharing economy is hip and booming, the sky seems to be the limit, and anything is possible. With over a million addresses in many parts of the world, Airbnb is still big business. But in quite a number of these places, residents are concerned about the growing numbers of tourists, and especially in residential areas this causes friction. Sometimes, as in the case of Uber in the Netherlands, these conflicts result in companies withdrawing their activities from a certain place. Platforms like Airbnb and Uber may be the new thing, but new things don’t always last.