The South African national elections take place on May 7 2014. What are they about? As the elections come closer, tensions intensify, rivalries become harsher, and scandals make headlines. Three concerns that run through everyday political rivalries:

The first democratic elections were held on April 27, 1994, and the world could see how millions of people were queuing up to cast their vote. Now, 20 years later, much has changed in South Africa. Many people have acquired rights that were unimaginable during the oppressive apartheid years. Yet, we also need to recognise that two problems have persisted: high levels of violence, and inequality.

The Institute for Security Studies found that the rates for murder and sexual offences have recently increased. Ideally, violence should be the monopoly of the state, but 20 years of democracy have not led to an adequate protection of its citizens. Only people with high incomes can protect themselves to some extent against violence, but they do so by relying on the private security industry, which has become the largest private security industry of the world.

South Africa has the most unequal income distribution in the world and many people, predominantly Africans, have not benefitted economically from the democracy. It is particularly the young people who are in a dire situation. According to the World Economic Forum, South Africa has the third highest youth unemployment rate in the world. Will they remain loyal to the ANC? The ANC, as well as some opposition parties like Malema’s EFF, do their utmost to remind voters of their crucial fight against apartheid. But this message is becoming less and less convincing for the impoverished black youths.

More than a quarter of the population receives some kind of cash benefit from the state. Many families depend on the state providing old age grants, child maintenance grants, or disability grants. In the new millennium these benefits have been the fastest growing category of government expenditure. Millions of poor people depend on state development projects for housing, healthcare, and schooling. Redistribution is central to people’s livelihoods and therefore central to the elections.

I have examined (in this article) how redistribution leads to crucial concerns about morality and legitimacy. People ask questions like: What is the right way to redistribute? How do we deal with responsibilities for others when we receive money? And if we do not vote for the ANC, will we still receive these resources from the government?

These moral questions are also reflected in the allegations that president Zuma spent more than R200 million (approximately €14 million) to upgrade his private property in Nkandla, and will spend ten times that amount to build ‘Zumaville’. The election is about ways of redistribution, about political patronage, personal loyalties, and to whom the government will deliver what. 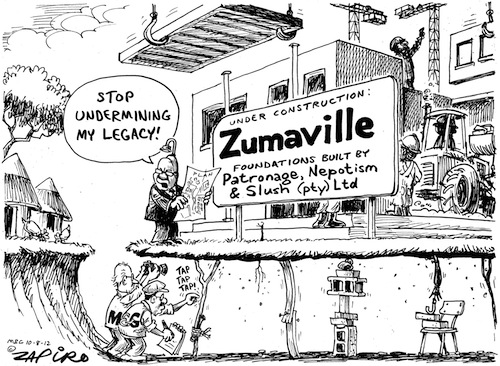 Why would millions vote for a political party that does not seem to have their interests at heart? In order to soften the harsh economic inequalities, political parties - particularly the ANC - emphasise racial unity. During fieldwork in the townships of Cape Town I was told that it was unimaginable to vote for a white or coloured candidate. Yet over the past 20 years we have seen the rise of a small black elite who by and large do not seem to care much about the African poor. They have little in common with the millions of voters who cannot even dream of driving a BMW or of wearing Gucci and Prada.

The rainbow colours can still be found in the national flag, but are no longer part of the election campaigns. Instead, the ANC as well as several other political parties point to the shared racial identity, hoping to convince the poor that it is in their interest to vote for a black political elite. On May 7, we will see to what extent the ANC successfully mobilised voters with vital redistribution, a shared history, and a shared racial identity.